The ego has landed, again, but he’s a lot more endearing this time around.

Reality Killed the Video Star marks Robbie Williams’ overdue return to the pop world, exuding a coolness and consistency absent on 2006’s Rudebox. It finds him working alongside producer Trevor Horn, whose catalogue of hits is substantial enough to turn even a sometime egocentric like Williams green with envy. And the pairing largely works well, with Reality… featuring a wealth of strong, single-worthy tracks.

The first song to be released as a single, Bodies, isn’t the most immediate number on this 13-track affair, but acts as a valuable bridge between the swagger-and-strut front of Rudebox and the introverted, understated highlights to be found here. A strange brew of string flourishes, rumbling low end, oriental undertones and even an Enigma-style break into Gregorian territory, Bodies is superb on radio, sitting between so many sound-alike offerings, but seems a little bloated here. Nevertheless, it’s very much that wonderful cliché: a return to form.

Last Days of Disco is a track that clicks on the very first listen – reminiscent of Eurhythmics and featuring the inevitable line “don’t call it a comeback”, it’s a far better tribute to the synth sounds of the 1980s than anything from the hot-right-now La Roux. This is partly down to Horn’s involvement – he produced much of his best-loved fare during the decade, and worked with the similarly styled Pet Shop Boys in 2006 – but Williams’ half-whispered vocals suit the icy beats superbly. It’s not as recognisably Robbie as Bodies, but there’s no doubt it’s a far superior song.

Deceptacon – unlikely to ever be confused with the Le Tigre song of the same name given its slow-motion build and luscious orchestral peak – Blasphemy and Superblind are skilfully arranged tracks which find Williams in his comfort zone vocally, the music around him instead given license to soar. And it’s this balance between the star of the show and the necessary material he’s at the centre of that makes Reality… his finest album since I’ve Been Expecting You. It’s got its share of hits in waiting, but the flow of the record is excellent when heard as a whole.

It’s not without its faults – Williams’ lyricism still leaves much to be desired, especially on Won’t Do That – but Reality… is a record its makers can be very proud of indeed. The ego has landed, again, but he’s a lot more endearing this time around. 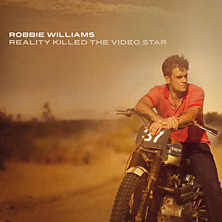