...this album seems a bit of an artistic compromise, music from the rule book rather...

The steady trickle of female, retro styled soul vocalists is threatening to become something of a deluge these days. Since Erykah Badu opened the gates some years back, we have been treated to the likes of India.Irie, Norah Jones and Tasha's World.And now there's a newgirl in town, Devon's (yes Devon's) sixteen year old Joss Stone. A more unlikely source of 70s style rootsy soul you will be hard pressed to find.

The story is that Stone put her planned debut of original songs on hold to record this collection, which features covers of some classic soul numbers and a selection of contemporary songs. Along the way Joss has been generously assisted by a cast of musical luminaries including Betty Wright, Angie Stone and The Roots.

With that credit list and material to fall back on, it was unlikely that this project could miss commercially. The classic soul ingredients are all authentically presented; Joss hits all the right notes and injects her vocal lines with all the right inflections.Indeed, her version of The White Stripe's "Fell In Love With A Boy" blends so well into the funky soul landscape that those less familiar with contemporary rock might miss the ironic juxtaposition altogether.

However, reassuringly comfortable though this music is, you can't help but feel it lacks any real bite. When compared with Amy Winehouse's attitude ridden debut, Frank, The Soul Sessions is pleasant, predictable and just a little dull. Take, for example, Stone's cover of the Drifter's "Some Kind Of Wonderful", which here sounds overworked, strained and just not quite right.

It's impossibe not to like some of the tracks; the catchy "Super Duper Love" has received heavy radio play and I imagine will sell well with the Radio 2 set. But ultimately this album seems a bit of an artistic compromise, music from the rule book rather than the heart. That said, I for one look forward to hearing her first proper album, which will hopefully allow us to hear more of Joss's real soul. 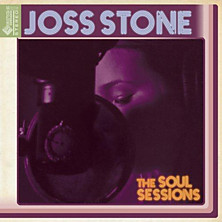