It's back to Baroque for Magdalena Kozena.

After last year's very personal disc, Songs My Mother Taught Me, it's back to Baroque for Magdalena Kozena as she turns her vocal chords to the operatic arias of Vivaldi. She is joined by the Venice Baroque Orchestra under Andrea Marcon, with whom she recorded her Handel album, Oh mio cor, a couple of years ago.

The repertoire is a mixture of soprano and alto arias that Kozena felt showcased the variety of Vivaldi's approaches. Unless you're a real Vivaldi buff, the chances are that none of these are going to sound terrifically familiar, with the exception of ''Gelido in ogni vena'' from Farnace which borrows music from 'Winter'' from The Four Seasons. Familiarity isn't everything, though, and this is a disc to be savoured until you do know every note. The arias tend to be slow-tempo rather than virtuosic; Kozena admits to being drawn to the gentler side of Vivaldi's art, and why not? Her first recording success was her Czech Love Songs disc of 2000, and her honeyed voice is beautifully suited to softer repertoire.

It doesn't mean that she can't do the pyrotechnics, however, as her glittering vocal work and dramatic fire in ''Armatae face et anguibus'' shows. Kozena is keen to point out that the spare textures of the slower arias present their own challenges, in how to make them sound emotionally alive. ''Normally I like to look for huge contrasts, but I don't think that’s right for Vivaldi'', she explains. ''You have to find a single serene emotion in them and hold onto it. That's much more difficult than the virtuoso bit''. I find it interesting that she uses the word 'serene', as it's the word that has already come to my head for her interpretations. Even the fireworks numbers seem underpinned by a Zen-like calm, although emotional intensity is still there in bucket loads, as the anguished ''Sonno, se pur sei sonno'' demonstrates.

This is a beautiful disc – wonderful repertoire, breathtakingly sung, presented by Kozena and the orchestra with freshness and vitality – which shows off the fruits of Kozena's long relationship with Baroque repertoire. 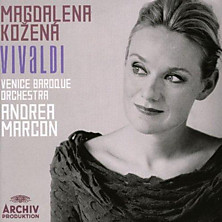