An absolute delight that has been worth the wait.

It has taken the enterprising women of Trio Mediaeval a while to produce a medieval sacred music follow-up to their 2005 hit Stella Maris, but it has been well worth the wait. A Worcester Ladymass is a glorious experience.

The title "Ladymass" refers not to the female singers on this recording, but to the mass’s association with the Assumption of the Blessed Virgin. In fact, it is extremely unlikely that women would have performed this music originally, written by and for the 13th century Benedictine monks of the Abbey of St Mary’s, Worcester; but, as Trio-member Anna Maria Friman points out in her frank and engaging booklet notes, it is impossible to create an authentic mediaeval vocal sound because of the incredibly small amount of historical information about how this music would have sounded in the middle ages. She sees this as a positive thing, providing "the freedom to let our imagination and ideas flow, as though we are creating contemporary music". Taking this creative initiative to its fullest extent, the Trio has commissioned contemporary composer Gavin Bryars to plug some of the liturgical gaps in the surviving manuscripts with new pieces: a five-minute Credo and a short Benedicamus Domino at the mass’ conclusion.

It is ironic that most of the surviving sacred polyphony from the middle ages was discarded in its own time as scrap. Worcester is an especial treasure-trove of manuscript fragments which were cut up and used to bind other things, thus escaping Reformation destruction at the hands of Henry VIII. The fragments that the Trio and academic Nicky Losseff have assembled into this Ladymass contain vibrant examples of different musical styles: formal declamatory tones for the conductus; free-flowing intricately-interweaving lines in the motets; and sumptuous polyphony to adorn the mass movements. Bryars’ new compositions sit very well alongside the medieval originals, deftly maintaining an incongruity of style without shying away from using modern harmonies and rhythms; and the Trio’s alluring performances ensure continuity.

Taken as a whole, this album is an absolute delight. Whether you simply want to wallow in a wave of seductive tones, or sit up and revel in the superbly-rendered polyphonic complexities, Trio Mediaeval ensure that the experience will be a wonderfully enriching one. 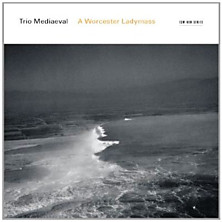