Saxophonist and composerTrygve Seim follows up his 'Source' recordings with this new...

In its most literal translation, the Sanskrit word sangam can mean 'the meeting point of three rivers'. This appears to be the interpretation preferred by the Norwegian saxophonist Trygve Seim, rather than the commonly held 'coming together', 'confluence' or 'learned gathering'. This is an appropriate way of communicating an equal interest in jazz, folk and classical tributaries.

Actually, Seim isn't terribly interested in making a jazz album. He employs the tones of modern classical composition, a highly controlled, reed-heavy ensemble spread. These horns are often found in their lowest manifestation, with Havard Lund playing bass clarinet and Nils Jansen alternating between contrabass clarinet and bass saxophone. Whereas other hands would have pinpointed the gruffness of these low reeds, Manfred Eicher's productionmelds them into a group entity, in sympathy with Lars Andreas Haug's tuba and Morten Hannisdal's cello.

This is Seim's second ECM album, following 2001's Different Rivers, although the saxophonist did release a trio album as The Source in the following year. In the late 1990s, Seim had grown up in the now departed drummer Edward Vesala's band. Seim admits that he was initiallyinfluenced by Jan Garbarek, although by now his own playing personality has certainly evolved.

Trygve's compositions are concerned with painterly colours and a gradual shifting of texture. He's interested in the composite whole rather than creating avehicle for soloing. This is not to say that Seim's band members are completely inhibited; trumpeter Arve Henriksen rises up on several occasions, playing with his softest voice. The leader himself adheres to brightly capering melodies, particularly when soloing on clean soprano. When blowing tenor, Seim has a nuzzling, natural sound, deeply-rounded but recorded with a certain sterile distance.

These drones or blankets pervade, whilst any solos work towards a similar end. Seim does run the risk of erasing all personality traits with his democratic style, but it's the overall character of his compositional thinking that has become the most important element. 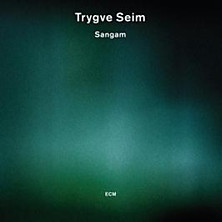