...it's the Hammond which provides the best moments here, with its throaty growl...

Jackie Mittoo was a true star of Jamaican music; a founder member of The Skatalites, a prolific composer and the keyboard powerhouse behind many a classic tune. His simple, often hypnotic approach, to ska, rocksteady and reggae made him one of the most distinctive sounding musicians of the era.

This collection focuses on Mittoos' mid-70s output, offering a snapshot of a particular moment in reggae, highlighting where the music had come from and where it would be going in the years to come.

Although Jackie mastered the plethora of synthesizer keyboards that were changing music in the 1970s, his favourite instrument remained the workhouse of soulful sound - the Hammond organ. And it's the Hammond which provides the best moments here, with its throaty growl winding through the stabbing rhythm tracks, thumping bass and dub style echoes. Ironically these tracks sound the least dated; the effects of Mr.Moog and friends sound jarring in comparison to the older instruments swirling magnificence.

Much of the material here was produced by Bunny Lee and features the most progressive Jamaican rhythm section of Sly Dunbar and Robbie Shakespeare on drums and bass, a studio line up of perfectly matched musical capability. Winston Wright, that other legend of reggae keyboards, appears playing organ and contributes some deeply skanking clavinet lines.

The tracks explore a variety of moods, with a general nod in the direction of dub. Rastafarian mysticism is evoked on "Drum Song". Pop sensibilities are never completely ignored, as heard in Mittoo's catchy riffing on "Super Charge."

In his later years Jackie Mittoo relocated to Canada and worked with other Jamaican ex-pats to expand the reach of reggae music. He was a regular visitor to London, working with Bunny Lee and Sugar Minnott on various projects. Towards the end of his life he even joined a reformed Skatalites. It is, however, in his solo work that his instrumental genius shines through. Champion In The Arena is a wonderful collection, a fitting tribute to a singular talent. His death in 1990 left a void which is still to be filled. 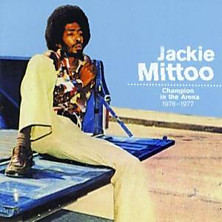