It's both ever-changing and somehow still at its very centre.

The Nordic threesome began life as the rather more difficult to pronounce Björkenheim/Håker Flaten/Nilssen-Love, but soon saw sense and assumed their present moniker. It's difficult to imagine a group with a more fitting name, such is the intensity of their improvisation. The thing that's most likely to grab new listeners (by the throat) is the fearsome energy with which they play. Following in the wake of that comes the sense of sheer detail: moment to moment this music is dense with information. Imagine slicing a cross-section through it though and there's every chance that an elegant structure will be revealed.

Scorch Trio's music is as knotty as their surnames. It's full of gnarly, gristly improvisation that requires thorough mastication to digest. The overused phrase power trio does this music little justice. Epic opener Olstra begins with thrashing drums and angular shapes courtesy of Finnish guitarist Raoul Björkenheim and proceeds to ratchet up the mayhem for the next ten minutes. More becalmed pieces such as second track Basjen are like the proverbial blasted heath, a burnt offering rich in blackened sediment. Its successor, Hys, kicks off in a flurry of Nilssen-Love's drums, is mercilessly butted by Håker Flaten's bass and worried senseless by Björkenheim's restless guitar.

The three men reach certain strange moments in their music, whether becalmed or hyper-intense, that prompts this listener to wonder just how they manage to combine such abstraction with so much thrilling exhilaration. This is music descended from electric jazz, especially Miles Davis, and also Jimi Hendrix. It's both ever-changing and somehow still at its very centre. 33 minutes of additional tracks are only available on the vinyl release... plea to record company Rune Grammofon: how about an MP3 download for these tracks? 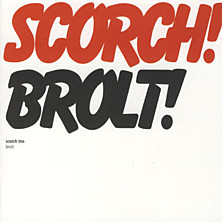