Proof that intricately constructed orchestral music need not be a sit down affair.

Dance and jazz don’t often shuffle into the same semantic space these days, so this is an intriguing proposition in more ways than one. Although the title is the name of one of the emblematic house labels of the 90s, it also implies that whosoever vacates their seats to shake a leg, should partake in that crucial activity so often forgotten by music lovers – listening.

One of France’s great national institutions, Orchestre National de Jazz has done sterling work since the mid-80s and this latest project, under the artistic direction of Daniel Yvinec, is progressive, bracing big band music for ears as well as feet. It is a worthy successor to 2009’s Around Robert Wyatt, an intelligent re-imagining of the Soft Machine man’s oeuvre. With the charts of John Hollenbeck, drummer and composer-in-chief of the much-feted Claudia Quintet, on their music stands, ONJ’s five winds and five-piece electric rhythm section again have rich source material at their disposal, not least because Hollenbeck has mused at length on the notion of groove, dance and movement.

This has yielded compositions that strike an artful balance between engaging rather than monotonous ostinato figures and astute changes in harmony, tempo or meter, which is, of course, something that has historical precedents from Ellington to Don Ellis. But, as is often the case in his Claudia work, Hollenbeck has a real knack for creating mobile thickets of counterpoint and interlocking gamelan-like motifs that give the work a kind of omni-directional quality: there is sideways as well as forward motion.

ONJ executes the material brilliantly with soloists such as saxophonist Matthieu Metzger and pianist Eve Risser lacing their statements with deftly handled electronics that enhance the general hypnosis of the scores. The last point to make is that Gilles Olivesi and Boris Darley’s superlative engineering gives the music a warmth and thickness that matches the best records in techno or hip hop, with the sub-bass tones in particular jumping out of the speakers. Proof that intricately constructed orchestral music need not be a sit down affair. 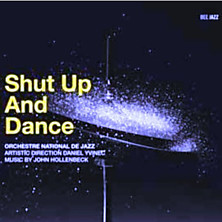