If you’re looking for a record to banish the winter, this could be it.

A peculiarity of the rise of the blogosphere as an agenda-setting force is that while there now exists a sprawling global network of hipsters that will gluttonously pounce on the demos of unsigned US chillwave artists the second they’re uploaded to wordpress, it is, conversely, perfectly possible for a genuinely successful band from a quieter quadrant of the world to possess almost no international profile.

Still, this delay is no terrible thing, as TPF arrive very much matured into the finished article. The band in no way reinvents the wheel, but their dreamy, synth-heavy spin on Byrds/Beach Boys-style pop is immaculately crafted. Certainly it’s hard to believe a 19-year-old dweeb in his bedroom would be liable to come up with a pop song as perfectly overwhelming as Buffalo’s title-track, a sweet, dreamy jangle that’s abruptly hoiked into the stratosphere by an incandescent synth arpeggio of astonishing vitality. And such are the chops brought to bear on Orange & Mango that a truly dreadful chorus lyric (“It takes two to tango / Like an orange and a mango”) doesn’t really get in the way of it splendour, reminiscent of the poppier moments of Sufjan Stevens’ mighty Illinois.

Elsewhere, the band tends to plough a less-energetic furrow: it’s ultimately going to be down to personal taste if a record dominated by low-tempo, medium-hooky, warmly atmospheric songs is likely to appeal (fans of latter-day Super Furry Animals might easily have found their new favourite band). Whatever the case, those years out of the spotlight have served TPF well: every second of Buffalo is wrought and layered with artisan care, and if ever you were looking for a record to banish the winter, this could be it. 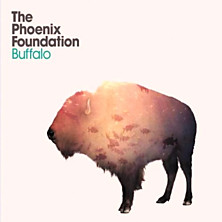