Spandau Ballet always did benefit from being a bit late. Far from being a pioneering work, their debut single To Cut a Long Story Short was released in November 1980, long after Gary Numan, John Foxx, The Human League and Orchestral Manoeuvres in the Dark had blazed a synth-pop trail – six months was a lifetime in those fast-moving post-punk days. To be fair, Chant No. 1 was a revolutionary white-funk record – although even there they were beaten to the punch by Heaven 17 – and their switch to lush blue-eyed soul with 1983’s True came one full year after ABC’s groundbreaking The Lexicon Of Love.

And yet each time Spandau cleaned up by offering a version of their peers’ more radical experiments, one that would prove palatable for mainstream consumption. They’ve capitalised on being tardy again with their decision to reform this year, long after all the other 80s bands have attempted their comebacks. And it’s been the most successful one to date, with sell-out shows at the prestigious 02 when even Duran Duran, far bigger in their pomp, only managed academies and indoor arenas when they returned a few years back.

Timing, then, has always been Spandau’s forte. They’ve also tended to have a keen sense of what the British public likes at any given moment, and on Once More they tap into the current national penchant for overblown adult balladry. And so, with producer Danton Supple, responsible for Coldplay’s X&Y, they decamped to Hook End studios in Oxfordshire to rework their back catalogue and give it the full X Factor treatment. There are two new songs here – the title track and Love Is All – and they are, in this context, and given the consistently bland treatment, virtually indistinguishable from their 80s hits.

To Cut… is redone, to near comical effect, as a semi-acoustic rock song, and Chant No. 1 has been reduced to supper club vamp. True isn’t so dramatically different, but it’s far less lavish than the original, and thus less compelling – Swain and Jolley’s production was a key part of its journey to glory. That production would also provide balance for Tony Hadley’s foghorn croon – now, on Gold, the voice overpowers the song. In 1982, She Loved Like Diamond was a radical gesture, a bold foray into John Barry territory; it is now a generic MOR ballad.

Still, just in time for Christmas. 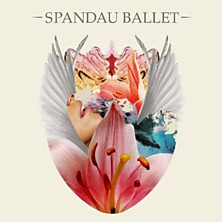