Fragmentation and obliqueness are ever-present on Stevens’ latest LP.

It’s unusual for an artist to have wider renown for the scope of their ambition, rather than for a particular piece of work. Yet Sufjan Stevens’ place in pop culture consciousness revolves around his professed desire to write a record about every American state. With just Michigan and Illinois undertaken in the last seven years, the project’s completion seems unlikely, unless Stevens lives far beyond his 35 years. Still, those albums made clear his unique songwriting trademarks – an author’s penetrating eye for detail, and a lilting voice backed by pulsating, rhythmic orchestration.

For an artist with such an obvious interest in story and narrative, it’s a surprise to see The Age of Adz, his first album proper since 2005’s Illinois, declare at the end of its opening ballad that "words are futile devices". That line acts as a clarion call for the tone of the record, one apparently loosely based on the imagery of American artist and schizophrenic ‘prophet’ Royal Robinson. If narrative consistency was paramount before, here fragmentation and obliqueness are ever-present. Too Much is suffused with Kid A-like sighing synths and waves of glitches, while the title-track comes across like the lost soundtrack to some strange 1930s sci-fi B movie, all blustering strings and choral harmonics.

There are some beautiful moments in amongst the manic electronic experimentation, but Stevens’ strength as a songwriter lies primarily in his sincerity, his ability to express intimacy without appearing cloying or saccharin. As such it’s the most subdued, personal songs on The Age of Adz that have the deepest impact, such as Now That I’m Older with its sad refrain of "somewhere I lost whatever else I had". Still, the over-riding sense here is of a world in pieces, and an artist in the process of shedding his former self. When Stevens shrieks at the end of I Want To Be Well, "I’m not f***ing around", you wouldn’t want to argue with him, let alone when the album ends with an extraordinary 25-minute piece, Impossible Soul, that amalgamates elements of folk, hip hop and everything in-between.

As with the rest of the album, though, the lengthy closer is suffused with individual moments of brilliance but let down by its self-conscious incoherence. The Age of Adz is a record to admire, rather than to love. 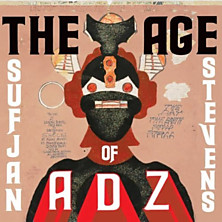