Imaginative and surprising collaboration from Berlin-based pianist and cellist.

Those familiar with Nils Frahm’s recent album for the Erased Tapes label, The Bells, may be surprised by the direction the musician has taken for this collaboration with another Berlin-based artist, cellist Anne Müller. Though he’s primarily known for his solo piano work, Frahm’s most impressive contribution here is his electronic production, while his piano is essentially confined to occasional cameos. But Frahm is no more averse to surprises than he is to collaboration, his live work often involving improvisation that sees him calling upon others – such as labelmates Ólafur Arnalds or Peter Broderick – to join him on stage, and it’s clear that the inspiration he found working with Müller has led him to focus on more contemporary aesthetics.

Müller’s pedigree isn’t bad either: as well as providing live accompaniment to the hushed and intriguing Agnes Obel, she’s a member of the Wolf-Ferrari Ensemble, and her neo-classical influences sit well with Frahm. Showcased to great effect on the album’s first track, Teeth, and the hypnotically minimal (and brilliantly titled) Let My Key Be C (Thriller Edit), her playing is refined and restrained, her ability to tug on the heartstrings as effective as her skill at bowing cello strings.

But it’s when Frahm lets loose with his glitchy treatments that things begin to get really interesting. Show Your Teeth flows with the urgency of a drum’n’bass tune with its bass surgically removed, and Duktus sounds like chamber music relocated in space. Journey for a Traveller, meanwhile, at last places Frahm’s piano upfront while around it delicate static pops and whirrs, though the decision to let him sing on Long Enough might have been a little too indulgent, his voice tentatively pushing for a melody that never quite gains traction, possibly the reason the track is buried at the album’s end.

It’s the album’s title-track that truly stands out, however, the scratchy, nervous electronic backing sounding like it’s borrowed a couple of production tricks from M83, Müller’s cello a solemn anchor to what sounds like distant ship horns echoing across dark seas. It teases out goose-bumps in way that alone gives rise to the hope that this won’t be the last time we see the two working together. 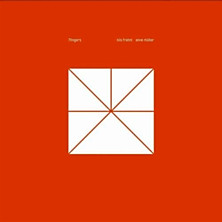