An outstanding album which improves upon the Swedish singer’s great debut.

Despite acres of critical acclaim, Lykke Li’s debut album Youth Novels barely registered with the public outside of the Swedish singer’s home country. A tender blend of the funky, the sensual and the elliptical, the 2008 record will probably be discovered by gleeful new fans shortly after this second album kicks the singer’s profile up several notches.

Wounded Rhymes is another outstanding album, slightly better and definitely bigger than Youth Novels. Although there is a level of subtlety at work here far more sophisticated than most mainstream releases, the sound’s sheer size is almost overwhelming.

Driving, booming percussion, including much ominous pounding of kettle drums, is prominent in many songs, from the stirring call-to-arms opener Youth Knows No Pain to the thrillingly voyeuristic single I Follow Rivers. When these cascading beats combine with Lykke’s often bleak or malevolent lyrics, the tunes resemble a haunted wall of sound, like Phil Spector hijacking a ghost train.

Lykke’s voice occasionally recalls that of Dusty Springfield. She certainly tackles the uncertainties and unhappiness of love with as much pathos as the late soul siren. Love Out of Lust is sadder than eating alone in a public place, while the doo-wop lament of Unrequited Love is a thing of beauty and thankfully far less harrowing than its title.

The album’s centrepiece is Get Some, first unveiled online last October to grateful and justifiably excited listeners. Any song with lines like, "Like a shotgun needs an outcome / I’m your prostitute, you’re gon’ get some," must be immense, and it is. Percussion is at its most frenzied on the album, Lykke is at her most evil and decisive, and the whole thing throbs malignantly.

Special mention must also go to Jerome, the aural equivalent of Sandra Bernhard’s scary kidnapper in The King of Comedy, and Silent My Song. The latter is the only time fellow Swede alt-heroes The Knife are an overt influence. Their trademark industrial clank and foghorn/didgeridoo synth sound are all over the song like cheese on toast, while lyrics like, "I can’t tell if I am living or just holding on," would please Karin Andersson.

With Adele’s chart success, PJ Harvey’s solid new material and the possibility of a new Kate Bush album, 2011 is shaping up to be a terrific year for strong, distinctive female voices. If Wounded Rhymes brings Lykke Li huge success, it will be richly deserved. 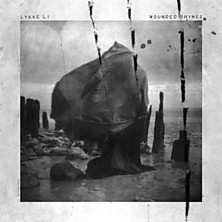