U2 The Unforgettable Fire Review

U2 would never be the same again.

The Unforgettable Fire was the right record at the right time. U2 had ended their first phase of flag-waving sincerity with the live mini-album Under A Blood Red Sky and its accompanying long-form video, Live At Red Rocks. Their preceding album, War, was a self-assured update of their early melodic template of spiky rock and searing anthems.

Instead of repeating their formula they enlisted the production skills of ex- Roxy Music polymath Brian Eno and young Canadian Daniel Lanois. Island boss Chris Blackwell tried to dissuade the group from using the duo, but they pressed ahead. Enrolling Eno brought the band a credibility they may never have gained; in turn, they gave Eno his largest audience ever.

The nagging insistency of opener, A Sort Of Homecoming, signals this new direction – all slightly out-of-focus, sketchy, yet strangely beguiling. However, instead of the producers trying wholesale to meddle with the existing formulas, both parties enhanced each other's work, which added a looseness and ambiance to the groove. This is none more evident than on the title track, which has a sleek suppleness to it, as previously unheard on their work, while still unmistakably being U2. However, they knew not to alienate too much – the album's first single, Pride (In The Name Of Love), is still arguably U2's greatest stadium sing-along.

It was ostensibly promoting this album that U2 played their most important gig ever, Live Aid, showcasing the resolutely uncommercial Bad – a song about heroin addiction that Bono has described as being Van Morrison crossed with German electronica – the band became, alongside Queen, the talking point of the day.

U2 would never be the same again. Although often overshadowed by its successor, The Joshua Tree, The Unforgettable Fire is a record of great, moving beauty. 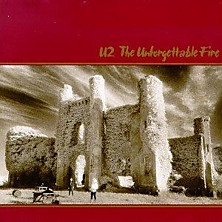