One of the American Gothic greats reveals his second LP of 2011.

Cass McCombs’ worldview can be nailed by his pithy response to being asked what he’d like on his tombstone: "Home at last." The comment, worthy of Tony Hancock or Spike Milligan (who, when asked the same question, chose "I told you I was ill!") has even more tragi-comic effect when you know McCombs is a bona-fide nomad, living in cars, on couches and at campsites across various US states. Pathos has always his calling card, with the emphasis on tragedy, despite the title Humor Risk. But it’s McComb’s second album inside nine months, so he’s productive if not teeming with bowl-of-cherries optimism. Wit’s End – his fifth-and-a-half album in 10 years – remains one of 2011’s finest, a series of gaunt songs that evoked the decline of another drifting day, yet came injected with a new-found sense of calm and warmth. Maybe that was just a production trick but McCombs did sound like he was home at last.

Perhaps that’s why he has made another (mostly) sublime record. Recorded in California, New York, New Jersey and Chicago, Humor Risk is (according to Domino) "an attempt at laughter instead of confusion". But as Ricky Gervais’ character in Extras might say: you ‘avin a laff? There’s nothing as devastating here as Wit’s End’s County Line, which conjoined The Velvet Underground’s Femme Fatale with Hank Williams, or how Memory’s Stain’s heavenly bass clarinet coda suggested a happy release in feeling there was nothing left in the body tank, but don’t expect chuckles. Try "Not you again / I thought you died" in To Every Man His Chimera, over a beat that can only be described as funereal with only a softly rippling guitar for company. Later on, a cat "leaves a rat’s carcass on my front stoop". Perhaps the cat heard McCombs chuckle and thought he’d teach him a lesson.

Yet the effect is as gorgeous as it is disturbing. The opening Love Thine Enemy reprises that Velvets-y two-chord throb while paraphrasing Tim Rose’s fatalistic folk-blues Morning Dew, and The Living Word taps McCombs’ Big Star Sister Lovers/Third album gene, the quintessential 4am-and-lost vibe, deadpan but not masking the pain. There is the odd letdown: Robin Egg Blue’s tune is as threadbare as the arrangement; similarly, Mystery Mail only justifies its eight-minute locked groove as a vehicle for its lengthy short-story structure (Humor Risk is an extremely wordy album). The closing Mariah (Sketch) is a blessed relief at four minutes, its melody more uncanny and disarming and its needling guitar resembling the flickering embers of a dying fire.

If you don’t know McCombs, and you reckon there must be someone out there as great as Bill Callahan (and better than Will Oldham) in the Americana Gothic racks, then Cass is your man. No laffs herein, but no risk either. 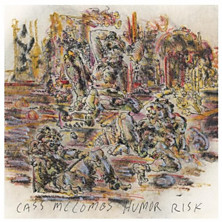