My Tiger My Timing Celeste Review

A debut that might well become some people’s perfect summer soundtrack.

New Cross outfit My Tiger My Timing have been liberally classified, among many styles, as “tribal electro”, as a “south London Gang Gang Dance”, with a broadsheet advancing this comparison.

Thing is, while GGD is an outré experimental NYC act known for polyrhythmic discordance, MTMT bears little resemblance beyond a female vocalist and synths in the line-up. Celeste is breezy, summery, inoffensive pop, albeit with some melancholic turns as the British summer can well provide.

Wasteland, a languid minor-key synth-pop plodder, is perhaps ill-advised as an opening statement of intent. Things pick up immediately though with Written in Red, the album’s second single, which sounds a bit like Happy Mondays’ Loose Fit enlivened by an infectious dancehall groove.

Current single The Gold Rush follows, a buoyant effort comparable to Gary Numan’s Metal. Here, singer Anna Vincent’s warm vocals – backed by harmonies from guitarist brother James – are more redolent of Saint Etienne’s Sarah Cracknell than any Yoko Ono experimental stylistics one might have anticipated. MTMT could be likened as much to Etienne’s electronic alt-pop as to the more contemporary Hot Chip, who actually produced some of their material, and Metronomy, who they’ve supported on tour.

The defining moment on Celeste is Endless Summer. The track’s video sees the band frolicking in a park with water guns and Frisbee while Anna sings: “School is out, all I want is endless summer.” Its unashamed hooky poppiness represents Celeste’s zenith, with the final few tracks barely qualifying as b sides, drifting to closure like the disappointing end to most English summers.

Released through the band’s own DIY label Snakes & Ladders, Celeste is a well-produced if patchy debut effort that might well become some people’s perfect summer soundtrack. Like the assault rifle-wielding girl on its cover, the album almost threatens something forcible from a surrounding picture of loveliness, but without fully delivering it. Hopefully with their next album they’ll open fire. 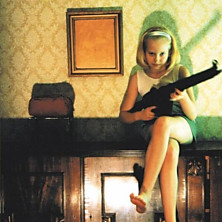