This is a solid clubbers' album that will secure van Doorns place in the Dutch Trance...

That the Dutchies love their big-room sounds is no secret. From Sander Kleinenberg and Tiesto to Ferry Corsten, Marco V and Armin van Buuren: The country has churned out more than its fair share of high profile crowd-pleasers, many of whom have straddled not only the realms of techno and trance but also the usual divisions between underground and mainstream.

Sander Van Doorn is the latest in this royal lineage, and Supernaturalistic his statement of intent. Hailed by some as 'the saviour of trance', fans of van Doorn will know he's as much of a techno aficionado as a trance don, and many of his key productions - Dark Roast and Grasshopper; King of My Castle and By Any Demand – merge these genres in a savvy and uplifting manner.

On Supernaturalistic, the DJ/Producer continues the same line of attack, flitting between hands-in-the-air euphoria and deeper, more penetrative workouts. Following the compelling intro Look Inside Your Head, fans will be delighted to hear the growling, pulsing fury of van Doorn's anthemic Riff, a monster of a tune whose power has not diminished over time.

His King Bee-sampling By Any Demand, on the other hand, still carries the whiff of cheesy novelty that made it hit and miss for many of us in the first place. 15, Apple, and Pura Vida get things back on track, bringing into play van Doorn's penchant for heady, euphoric sounds and an undercurrent of serious dancefloor hedonism.

More subtle fare is proffered too: the pounding Sushi, forthcoming single The Bass, (a monster of a track that carries a memorable French Kiss-style build), and the previously released Grasshopper, one of his more epic moments all underline the producer's penchant for a spot of minimalism.

Elsewhere van Doorn shows off his expanded palette by tackling melodic mid tempo fillers (Lobby) and coming up with leftfield tunes like the skittering, menacing Dozer. Closing track, Outrospective, provides a ray of optimism that we realize has been notably lacking on Supernaturalistic. But despite a dearth of vocals and a general play-it-safe approach, this is a solid clubbers' album that will secure van Doorns place in the Dutch Trance Hall Of Fame. 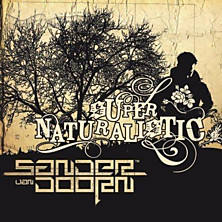