Time has not withered them.

In AC/DC land less is definitely more. Way back in the late 70s the Aussie legends defined an almost platonic form of rock 'n' boogie that was hand built to last. Time has not withered them. Yes, there's been the odd change: drummer, Phil Rudd went away for a while, the sales dropped, he came back; singer Brian Johnson (here handling lyrics for the first time in 20 years) took time off while he got divorced: but the world turned and AC/DC just went on doing what they do. Unless you live under a rock you should know that this means riffs the size of Ayers Rock (four track titles include the word 'Rock' or 'Rocking'), a backbeat that crushes all in its wake, a voice that screams like it's been gargling sandpaper and, over the top of it all, the squealing, frenzied blues solos wrung out of Angus Young's Gibson SG.

So why do we have a new album? Well, obviously after an eight-year break alimony piles up, mortgages and school fees burgeon and suddenly it's time to unleash the warhorse one more time. Sixteen albums in and AC/DC have no reason to tinker with a formula that was well-nigh perfect to begin with. The band has two default settings, menacing prowl (Black Ice, Decibel) and mid-pace unstoppability (Rock 'n' Roll Train, Anything Goes). Each song starts with a stuttering riff from Malcolm Young; for years the world's most unsung guitar hero. As dependable as a Swiss watch and every inch as magnificent a rhythm player as Keith Richards, he never seeks glory in solos, merely provides the grit and grind over which his schoolboy imitating bro can cause a flurry.

One slight negative is Brendan O'Brien's production. On Bruce Springsteen's Magic he managed to muddy up the sound, here he makes the Young brothers' edge a little too clean and dull. On tracks like Money Made or War Machine the attention wavers and the sheer thrill of dirty rock 'n' roll is not quite achieved. Yet, on the eve of an 18-month extravaganza touring Black Ice around the world, you know that something like Big Jack will sound great tearing out of a thousand watt stack.

Yes, they're greyer, slightly slower and slightly less convincing as the animals they used to be, but AC/DC have once more ensured that, for fans, this Christmas will be a very black one indeed. 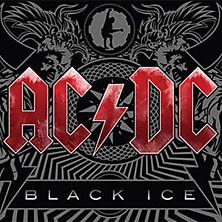