Mozart The Marriage of Figaro Review

An absolute joy from beginning to end. This is opera for our times, a subversive...

Madly scurrying strings and a fruity bassoon, the twang of a fortepiano cutting through the orchestra at the end of the first phrase of the overture, and a crisp, explosive burst of energy and adrenaline with the first loud chord: right from the top this Figaro feels as though it's going to be fun.

Just how much fun only becomes clear when the singers arrive: Figaro himself, sung by Lorenzo Regazzo: firm, clearly focused, and not for a moment played as a buffoon. This is serious comedy, and Figaro knows his employer the Count is dangerous, hell-bent on seducing his bride-to-be. His fiancée Susanna is Patrizia Ciofi, beautifully characterised: flirtatious, cheeky, overflowing with life and laughter...while her potential nemesis the Count is Simon Keenlyside at his dangerously rapacious best, a truly menacing presence who darkens every room in which he appears: a lethally intelligent portrayal.

Véronique Gens as the Countess is the epitome of elegance, every vocal line spun like silk. Angelika Kirchschlager is Cherubino, the irrepressible page boy, sounding uncomfortably under-pitch in the big numbers ('Voi che sapete'), and the parts of Basilio and Bartolo have been better cast for other recordings...but what most other recordings don't have is the sense that this has been taken straight from stage to studio, a living, breathing dramatic ensemble that's inhabiting the work, not just singing their parts.

But it's René Jacobs and Concerto Köln that propel this exhilarating account of Figaro somewhere special, and truly memorable. In the notes Jacobs writes about the neo-Classical approach he's after:fast tempos, the performance of the recitatives, the ornaments added here and there by the singers, and a few other features that may surprise the audience...like that fortepiano continuo. I suspect some listeners will hate it, thinking it too over-elaborate,but I love it.

Its irresistibly bubbly flourishes whirl us breathlessly from scene to scene, refusing to allow the drama to grind to a halt for a moment, so that some of the necessary elements of operatic artifice are concealed from us. The rest of the playing is zestful, colourful and characterful, and the recording is demonstration-class for all the right reasons: it refuses to draw attention to itself, while allowing all of this detail, all of this musicality and vitality to reach our ears undimmed.

The packaging is lavish, the pricing generous, the whole experience an absolute joy from beginning to end. Never mind neo-Classical: this is opera for our times, a subversive composer refreshed for a 21st century audience. Beg it, borrow it, buy it, blag it...but whatever you do, don't miss it: this is a truly life-enhancing Figaro, and I wouldn't swap it for another. 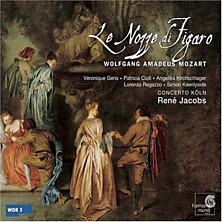