When early music meets folk, oddness abounds – but the revenge is very sweet.

Wilfully provocative as the title may be, it’s not entirely fatuous, perhaps a tongue-in-cheek reflection of the mutual suspicion that tends to lurk in the great divide between folk song and art music.

While various celebrated composers – Benjamin Britten, George Butterworth and Ralph Vaughan Williams among them – drew prodigiously on English folk song and helped to put it back into circulation in the process, the spiritual chasm between musicians who follow the dots and those who play instinctively tends to be a gaping one.

With some success, Dolly Collins notably attempted to knit these two opposing cultural mindsets in the 1960s with both her sister Shirley and David Munrow’s Early Music Consort, but the camps have rarely met since. All of which only adds fuel to this intriguing experiment.

Previously applying free-thinking early music elegance to everything from Robert Burns to Frank Zappa, Astor Piazzolla and the Buzzcocks, Concerto Caledonia – under the direction of David McGuinness – now turn their attention to the folk tradition. Co-opting four of the brightest young guns in the new folk army – Jim Moray, Alasdair Roberts, Olivia Chaney and Mairi Campbell – they decamped to Suffolk for a week to revive and reclaim an alliance between folk music and classic instruments and arrangements.

Mostly it works, too. Hearteningly free of the clichéd stylisation often associated with both corners, it encompasses enlightened treatments of some well-worn warhorses like The Foggy Dew, The Salley Gardens and Lincolnshire Poacher alongside fresh self-written material and the occasional enticing curve ball such as the Roberts/Chaney duet OK, I’ll Count to 8, which entertainingly marries an Ivor Cutler ditty to the intro of Britten’s O Waly Waly.

It’s an album that certainly marks the blossoming of the classically trained Chaney, who’s fully embraced folk music to emerge not only as an outstanding singer but an exceptional songwriter. Sung with appealing vulnerability over measured string accompaniment, her Daddy Oh, I’m Hoovering is a heartrending study of kitchen sink desolation, and her even starker The King’s Horses, which closes the album, confirms her arrival as a major talent.

Oddness abounds, but the revenge is very sweet. 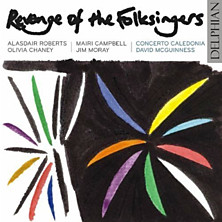