Always the victims of the ‘too much, too soon’ curse, Procol Harum, to many, represent one thing alone: “A Whiter Shade Of Pale”. As majestic and unequivocally fantastic as that single from 1967 remains, maybe this compilation, marking their 40th year in existence, will let a few more people into their best-kept secret. For they were for many years afterwards responsible for some astoundingly good music.

The industry’s debt to them is manifold. Were it not for the unique combination of Gary Brooker’s bluesy tones, Matthew Fisher’s neoclassical Hammond, Keith Reid’s opaquely surreal wordplay and Robin Trower’s blistering guitar work, we may never have really had progressive rock. At the forefront of those bands (including the Moody Blues) who longed to combine their r 'n' b heritage with the grandiose strains of classical music, the former Paramounts of Southend struck pay dirt from the very first single.

While their first two albums are all near-perfect examples of stately flower power-driven blues (and yielded yet more hits in the shape of “Homburg”, “Shine On Brightly” and “Conquistador”), it wasn’t until the third (A Salty Dog) that they really refined their darkly humorous lyrics and diverse musical backgrounds. Genesis seemed to model their early work on the title track alone. A couple of years later while they lost Trower (on his way to becoming the thinking man’s Hendrix) they still retained a marvellous sense of grandeur. Their album recorded with the Edmonton Symphony Orchestra gave us a nicely revved-up hit reworking of “Conquistador” and even by 1975 they still had the golden touch as their Ninth gave up their lovely “Pandora’s Box”.

All the while, despite their truly seminal status, Procol never sounded like anyone but themselves. Secrets... has all this and much, much more, all remastered to a miraculous degree, even compared with the last set of remasters. Taking us all the way up to the present day, its only wrong note is the tragic legal wranglings over the authorship of “Whiter Shade Of Pale” that have seen a wedge driven between Brooker and Fisher and also seen Brooker refuse to see his name associated with it until further notice. But no matter, for anyone who thinks this band lost their relevance by 1968 is urged, nay ordered, to go out and buy this, pronto. Time to trip the light fandango again… 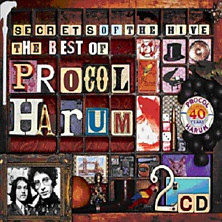