It seems odd now for one whose legend grows daily to near-mythical status, but by 1991 the Man In Black's stock was at an all-time low. The 80s had seen Johnny Cash suffer an ostrich-related abdominal injury, finally kick drugs, endure double bypass surgery on his ailing heart and then suffer an ignominious end to his career with Columbia Records. He'd finally found true solace in the Lord, but lost his standing amongst his peers. Luckily help was at hand from an unlikely source: hip hop/rock producer, Rick Rubin. The bearded doyen of Def Jam was a big fan of Cash and American Recordings was the beginning of a partnership that was to see Johnny take his rightful place as one of the great musical figures of the 20th century.

As a devotee, Rubin realised (unlike previous producers) that the one thing alone that made Johnny special was his voice. Like a piece of living history those vocal chords always exuded realness. It was this quality that had allowed the Man to stand in front of a hall full of hardbitten criminals and give some of the greatest shows of his life. Like all true artists (and not unlike the mythical land he represented) at his heart was a mighty schism. He'd seen the world from both sides of the prison bars.

With this in mind Rubin recorded an unaccompanied Johnny and his guitar in front of a microphone in his Tennessee home. The results were predictably intimate, but - as Cash started exhibiting the signs of a life spent in the fast lane - also shot through with gripping mortality.

Two songs he re-recorded: the murder ballad, Delia's Gone, and the cowboy lament, Oh, Bury Me Not (Introduction: A Cowboy's Prayer) have a palpable sadness and regret in them that he could never have achieved before. His take on old friend's songs like Kris Kristofferson's Why Me Lord? or Leonard Cohen's Bird On A Wire showed that familiarity never bred contempt in his eyes. A great song was always a great song.

Always, the choice of material is a revelation. The Beast In Me (written by former son-in-law, Nick Lowe) could be autobiographical. And while writers like horrorpunk figurehead Glenn Danzig or Tom Waits probably would never have figured on his radar were it not for Rubin; time and again the duo found songs that were, in Cash's hands, to take on new life. This willingness to experiment was to set a precedent: Subsequent albums were to see him work magic on material from Nine Inch Nails to U2 and Depeche Mode. But Johnny Cash's final road to redemption and artistic fulfillment starts here... 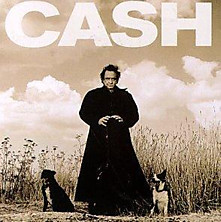