Fare to scald the soles of one’s feet rather than nourish the soul.

Eleven tracks in 24 minutes: The Computers know how to make their point quickly. And sharply, too – sharp enough to get right into the skin and stay there for a while. The Exeter band’s grit and gristle is clear enough, hoarse vocals and loud amps establishing themselves within seconds of opener Where Do I Fit In? – but they’re smart enough to combine such a snotty demeanour with some absolutely cracking tunes.

The band’s debut album was recorded stateside, at the home of John ‘Speedo’ Reis (punk legend; member of Rocket from the Crypt, Hot Snakes and The Night Marchers, among others), in just four days, and straight to tape, too. (No computers were involved… nice.) The result is as expectedly breathless as such a background promises – at no point do these four take their collective foot off the pedal. It’s a performance that has Pulled Apart By Horses sounding like Bruno Mars. A lot rougher than the group’s 2008 seven-tracker for Fierce Panda, You Can’t Hide from The Computers, clearly touring has left an impression in two ways: the vocals have a greater growly quality to them, and the tightness is absolute. It makes a difference: sloppiness in such shallow water and the ship gets grounded.

Sure, it’s all fairly one-dimensional – but the best punk, just like the best pop, needn’t have a deep underlying message. Calling on cues from the scene’s past, from Reis’ crews right back to LA’s early hardcore outfits, and nailing their hooks with great focus, The Computers deliver a wholly satisfying sound that won’t go stale any time soon. Mainly because there’s so little substance to it, but in this case that’s no bad thing whatsoever. From the fantastic retro swing of Rhythm Revue (think Hamburg-period Beatles covering Black Flag) to Blood Is Thicker’s caught-in-a-mosh mischief, via a flurry of cheeky swears and choruses crafted for hollering, this is fare to scald the soles of one’s feet rather than nourish the soul. Not that anyone’s going to get too hungry in just half an hour, anyway. 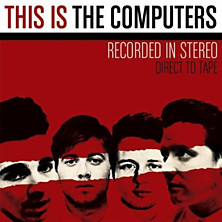