Unless you're well into your dance music, you probably know Sister Bliss as that woman out of Faithless. After ditching their record label in 2007, Ayalah Bentovim (to give her her full name!) has taken the pause in recording with Faithless, as an opportunity to release yet another great compilation album.

With a largely progressive house (or shall we just be honest and call it trance) sound to it, Nightmoves is, as the name suggests dark and moody sounding while at the same time being wildly anthemic. Opening track I Can't Wait For Love immediately presents the CD as very listenable with its twittering bleeps and rolling bassline sounding like a 2008 remix of The Source's You've Got The Love. Similarly the warm soul of Dynamix' gospel cover Shake Yourself Loose pushes us into a familiar place.

While the first CD may roll by like a lazy Baleric sunset, we're almost immediately horrified by Sister Bliss teaming up with Faithless maestro Rollo for a remix of Coventry indie scamps The Enemy on CD2. Thankfully she pulls it back with 2007's massive Mark Knight remix of Underworld's Beautiful Burnout. Other big names appear in the form of Layo & Bushwacka, Michael Gray who pops up with his remix of the schizophrenic All Alone and Pryda's epic Europa.

A smooth sounding, cool compilation; if you're into Faithless' sound, Sister Bliss has proved she still has the a DJ box bulging with tunes to push all your buttons. If it's a fair representation of her sound, Nightmoves is a good advert for catching her live in the clubs - if only to see first-hand the fierce blue makeup she wears on the cover! 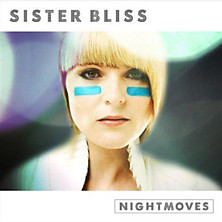