O'Connor lets the tunes speak for themselves, varying the arrangements with subtle...

It's a sign of the wealth of talent within the Irish traditional music scene that someone who's relatively unknown outside it can come forward and make the kind of splash that this Dundalk fiddler has with his debut solo album. Gerry O'Connor's previous work with the bands Skylark and La Lúgh is hardly high-profile, but it's clear from the quality of the playing on Journeyman that he's among Ireland's finest traditional musicians.

Likewise, the fact that only aficionados are likely to hear any familiar tunes among these twelve tracks isn't because they weren't worthy of recording, but rather a reflection of the depth of Irish folklore. As the exemplary sleevenotes explain, this is an autobiographical selection, documenting not only nearly-forgotten melodies of his native North East Ireland passed down through his own family, but also those picked up from colleagues in other counties, in the time-honoured way that real folk musicians still do. In the process, he's added his own distinctively ornamented, fluid take on various regional traditions.

Mercifully, O'Connor has resisted the temptation to draft in gratuitous guest vocalists, as so many groups of this kind feel compelled to do these days. Instead, he lets the tunes speak for themselves, varying the arrangements with subtle verve over a pleasingly diverse selection of jigs, reels, highlands and airs. Of the latter, an early highlight is "Úr-Chnoc Chéin Mhic Cáinte", which features gorgeously empathetic support from cellist Neil Martin, and Paul McSherry on guitar.

On some of the more upbeat material, the guitarist more or less constitutes the rhythm section, along with occasional touches of bodhrán by Martin O'Hare. Another star of this album is O'Connor's son Dónal, who contributes rollicking piano on about half the tracks, and shadows his father on second fiddle for the set jigs that kick off with "The Day The Ass Ran Away". In other places, there's fine support on accordion from Martin Quinn, who charges into the closing set of reels with the whole band in a fittingly exuberant finale.

Newcomers to Irish fiddle may find the all-instrumental approach a little monotonous and old-fashioned, but seasoned folkies will find much that delights. 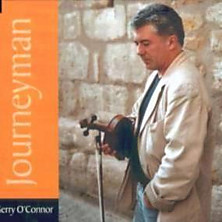