On 18 August 1979, The Stranglers supported The Who at Wembley Stadium, as part of a bill that also featured AC/DC and Nils Lofgren. The Surrey band were gifted the slot directly beneath the headliners, only to discover from their on stage vantage point that while both they and The Who could co-exist quite comfortably, their audiences could not. As bassist J.J. Burnel recalls in Maximum Rock & Roll, Murray Engleheart and Arnaud Derieux’s biography of AC/DC, Wembley was full with "80,000 people, [a] capacity audience. I just remember seeing a huge fight while we were playing, a huge punch-up in the middle of the stadium with The Stranglers’ fans having a fight with the mods… Punks versus mods! Classic!"

Thirty-three years on from this fracas, on the evidence of Giants it’s difficult to imagine anyone viewing The Stranglers as having ever been a punk band at all, let alone of a kind that could whip up its audience to the kind of levels sufficient to cause a scrap on a football field. That said, and as Elvis Costello once noted, the best groups to emerge in the initial wave of English punk could not wait to escape the straitjacket of the form. In this pursuit, The Stranglers performed more convincingly than most.

Longstanding fans of the band will no doubt be able to immediately fall in line with Giants’ odd and unique groove. But for the uninitiated, the overall sound seems crude, even amateurish: the drumming seems rudimentary, the production clumsy and blunt; worse yet, vocalist Baz Warne occasionally sounds like Mark Knopfler. Give this album a day or two, though, and its 10 songs begin to slip into context. The distant, autonomous interplay between bass and guitar rises to the fore; lyrics such as "the sincerity of fear make you much harder to hear than a butterfly in an air raid" rise from monotone verses; songs – Lowlands, for example – that at first sounded anonymous begin to register with a strange and sinister clarity. And soon enough the reason that The Stranglers are still able to attract two or three thousand people to every date of their forthcoming UK tour is no longer a mystery. 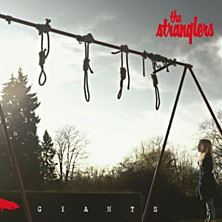