Often accused of too much macho swagger, the songs show diversity and sophistication...

Faced with the new album by a band who were in the vanguard of punk, have lost their charismatic lead singer and guitarist and whose last major hit was in 1990you may find yourself feeling a little edgy. All right and proper, until you realise that this is an album by a band who, after many years in the rock wilderness, have returned to a major label. And as we all know, NO major label spends a dime on any band that they don't think will give 'em a good return for their diminishing funds. In this case EMI were right.

In recent interviews leader Jean Jacques Burnel has been typically honest about the time it's taken for even the staunchest of Stranglers fans to finally get over the loss of Hugh Cornwall and accept Baz Warne and Paul Roberts as bona fide members. Since 1992 sheer bloody-mindedness has kept the three original members going and it's finally paid off. Norfolk Coast is, believe it or not, a very fine album indeed.

From the opening Fender Precision rumble and keyboard ostinato intro to the title track, it's as though the band are brazenly declaring their resistance to fashion. What then stops the album being a sad recreation of former glories is the quality of the songwriting.Dave Greenfield's organ technique may not have changed one iota, but in the context of the material it fits perfectly. The years in the wilderness just mean that the band are even tighter and, amazingly, still sound as hungry and dangerous as if they were back at the Vortex in 1977.

Both Burnel and Roberts sing, with Burnel adding a more menacing edge. Warne's guitar is jagged and in yer face while Jet Black's drumming doesn't even hint at his advancing years. Often accused of too much macho swagger, the songs show diversity and sophistication. Whisper it, but ''Dutch Moon'' even approaches an area marked 'jazz'.

Despite their hits of old appearing in numerous adverts it'll take some kind of marketing miracle to convince the masses to take the band back to their hearts, but long time fans will appreciate that this is a dark, brooding album, with many a trick up its sleeve. For the rest of us; don't be scared, the boys are back... 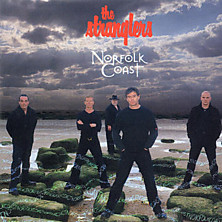