A recent poll by the music journalist Norman Lebrecht named Karl Jenkins as the most performed composer in the world today. Given that this premiere studio recording of Gloria, his brand new choral work, coincides with the Queen awarding him the CBE for Services to Music, Jenkins must currently be walking with a pronounced spring in his step.

Gloria is high on drama, with Jenkins' predilection for the sounds of ethnic and Third World cultures very much in evidence. The third movement in particular, a setting of Psalm 150, brings to mind his ever-popular Adiemus, with its primeval-sounding harmonies, declamatory choral style and pounding drummed rhythms. For some, this is as powerful as classical music gets. For others, it's a bit too reminiscent of Hollywood depictions of chanting natives offering up blushing maidens to King Kong.

There's more to Gloria than primeval pounding though, as the second and fourth movements show with their sustained melodic lines and tranquil tone. Hayley Westenra's fourth movement solo, the serene ‘I'll make music’, even takes a somewhat incongruous Disney-esque twist towards the end. Quips about blushing maidens and Disney sparkle aside, this is music that engages, whips up and then soothes the listener, and it's a shame that Jenkins didn't just let his music do the talking. Instead, the work's five movements are punctuated by readings in Sanskrit, Chinese and Arabic from the Bhagavad Gita, the Diamond Sutra, the Tao Te Ching, and the Qur'an. Jenkins claims these stand as a counterpoint to the Abrahamic religions, but in reality readings in Sanskrit and Arabic don't work on disc, at least not for a mainly English-speaking audience. They simply break the musical train of thought.

However, the musicians themselves can't be faulted. Accompanied by an LSO on top form, the National Youth Choir of Great Britain produce the deep, strong wall of sound needed in the punchier movements, and luscious creamy richness in the second movement ‘Laudamus Te’. Westenra is a perfect casting, her lilting pop-classical voice a sweet contrast to the vocal and instrumental power elsewhere.

This performance and the overall likeability of Gloria will probably keep Jenkins at the top of most-performed polls for some time to come. 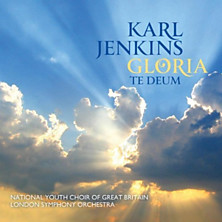