The disco album as rock classic.

Chic’s third album, Risqué, is one of the greatest exhibits in the case for disco’s defence. Released in the summer of 1979, it was as integral to the Atlantic label as any of the great rock albums that had taken the imprint out of Black America and into the world in the late 60s. With a budget of $160,000, it was a widescreen record with widescreen ambitions.

Good Times, with its striking, repetitive strangeness, is the greatest track here. It nodded to the Great Depression, with guitarist Nile Rodgers partially recycling the lyrics to the US 1930s standard Happy Days Are Here Again. It’s a masterful song, yet smacks somewhat of a distant desperation, a robotic reminder that if you repeat a mantra of happiness long enough you may finally actually believe in it. All the component parts of Good Times continually surprise: the four-note string refrain alternating on the verse; the almost claustrophobic unison of the vocals; and then the break. Bassist Bernard Edwards’ 20-note riff drives the record forward over Tony Thompson’s crispest snare-crack. It was used on street corners throughout the world as the backing to what disco did next: hip hop.

Of the album’s six other tracks, My Forbidden Lover explored the irresistible urge of the forbidden. What About Me centred on 70s selfishness. Can’t Stand to Love You was a dark vignette about sinister love ("Little punk do it for me, or I’ll number your days"), and Will You Cry (When You Hear This Song) is a painfully beautiful ballad, one of vocalist Alfa Anderson’s best performances. My Feet Keep Dancing demonstrates both Chic’s intelligence and sophistication. It underlines how dance is a celebration of life, even with the sound of vaudeville tap dancing as the ‘solo’. Only the beautiful A Warm Summer Night seems to drift by without any deeper agenda.

Risqué is an album that dwells on relationships: bleak, unrequited ones, tinged with sadism and despair; relationships with the past, and, of course, with the dance floor. As a result, it remains Chic’s most sustained artistic statement, a celebration of a 70s that was collapsing under its own excess and hedonism. Risqué is all angular veneers, thrown shapes and dark shadows – it is the disco album as a rock classic. 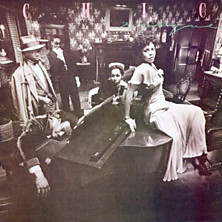