A union that just keeps on giving delivers its best album yet.

The most unlikely pairing in rock is now three albums old, and still it’s surprising that Isobel Campbell and Mark Lanegan have very much in common at all, let alone the ability to inhabit the same songs. Yet for all the eyebrows raised by a country-folk partnership between the fragrant, whisper-voiced founding member and cellist of Belle and Sebastian and the former ‘exhaustion’-prone ex-junkie singer with Screaming Trees and Queens of the Stone Age, it’s a union that just keeps on giving, with the steelier, more focussed Hawk the best they’ve given yet.

They may take co-billing, but the plaudits all belong to Campbell. As much as Lanegan’s gruff, Marlboros ’n’ bourbon growl is a draw card, Campbell is writer, producer, arranger and constant counterpoint to Lanegan’s malevolence. Hawk cements her standing alongside maverick serial collaborators such as Kurt Wagner and Will Oldham.

It’s in the way she blends country, blues and deep soul into something entirely her own, like a latter-day Bobbie Gentry. Come Undone revisits the torn yet unconditional love of Bettye LaVette’s Let Me Down Easy and James Brown’s It’s a Man’s Man’s Man’s World; You Won’t Let Me Down Again (with former Smashing Pumpkin James Iha on guitar) and Snake Song are black-hearted warnings to anyone who dares get too close; and Get Behind Me is a nail-hard bar-room stomp.

Sunrise – a solo Campbell track – could be Richard Hawley playing alongside Nancy Sinatra; Cool Water, one of two duets with Willy Mason, is a piece of lo-fi Johnny Cash and June Carter playfulness; Eyes of Green filters a Celtic ballad through Appalachian backwaters; and Lately revels in a touch of Hammond-led gospel to close the album on a joyous high. It’s also a sly nod to Bob Dylan, a particular Campbell hero: never one for the pernicious act of front-loading, pick up almost any Dylan album and the final track, as with Lately, will likely be amongst its best. Go on, try it.

During the album’s opening song, We Die and See Beauty Reign, Campbell and Lanegan sing that, “We f***** it up / forced the pace”. But nothing could be further from the truth. 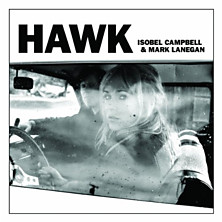