Richmond Fontaine, while still delivering an accomplished album, fail to hit the heady...

Despite releasing two of the Americana’s most critically-lauded albums of the decade so far in 2004’s Post To Wire and the following year’s The Fitzgerald, Oregon’s Richmond Fontaine remain resolutely obscure compared to contemporaries like Ryan Adams and My Morning Jacket.

For their seventh studio album, the four-piece relocated from their native Portland to Tucson, Arizona to try and capture the sounds and character of the U.S. south-west, visiting each of the thirteen cities that give the collection its title. The initial signs are promising.

First song proper “Moving Back Home #2” effectively evokes Tucson residents Calexico, due in no small part to a horn section led by the band’s Jacob Valenzula. Another Calexico member, Joey Burns, contributes glockenspiel and moog to the brooding soundscape of instrumental “El Tiradito”, and five tracks in, the album looks set to deliver a winning blend of Richmond Fontaine’s trademark country-rock combined with the new musical ideas inspired by their Arizona adventure.

Unfortunately, Thirteen Cities then rather inexplicably runs out of ideas. The remaining tracks fall somewhere between the exuberantly melodic road trip blues of Post To Wire and the sparser, folkier intimacy of The Fitzgerald, but without being as good as either.

Part of the problem is singer and band leader Willy Vlautin. A published novelist he may be, but his lyrical style, while undeniably evocative, is in danger of becoming stale. There’s only so many tales of drifting, drink-addled losers you can tell before they cease to be interesting. An exception is "The Disappearance of Ray Norton" which skilfully examines negative attitudes towards immigration in urban areas.

After such a strong start, it’s a real shame the experimentation of the early numbers is not sustained. As a result, the concept of a vivid, atmospheric tour around the disappearing American West is never fully realised, and Richmond Fontaine, while still delivering an accomplished album, fail to hit the heady heights of their last two works. 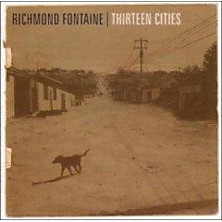