Married duo’s debut has its mesmerising moments, but overall is too reticent.

Apropos of seemingly very little other than boredom and disillusionment, husband-and-wife duo Tennis (otherwise known as Patrick Riley and Alaina Moore) decided to buy a boat and skirt around the Atlantic coastline and write songs about it. What we might reasonably expect, then, is an epic tale of seafaring derring-do, of shanties and odes dedicated to the deep; but Cape Dory is actually a rather more poppy, peppy affair. It sounds like a recipe for success in the vein of the vastly underrated Australians Antarctica Takes It!, with a healthy dollop of wall-of-sound slush, but in reality much of Cape Dory is too reticent and not catchy enough.

That’s not to say it’s without its moments (the blogs-in-a-frenzy breeze of Marathon is particularly fine), but there’s a distinct lack of anything especially memorable. The encouraging lilt of opener Take Me Somewhere is a perfect example – a keening and irresistible backing of choppy guitar and drums is rendered far less effective than it should be by an uninspiring vocal melody. Even a tempo change at the halfway point that ushers in a surf-pop extension can’t do much to make it more tolerable, and we’re left with a husk of a song that needed more work, or at least more weight, applied to the vocal.

Where, say, Beach House take the tenets of Spector-esque pop and amplify them to their own psychedelic ends, Tennis are content with merely aping its tropes. Aside from the aforementioned Marathon and the dreamy Bimini Bay, there’s a real paucity of rewarding work here. It’s competent, but ultimately rather unchallenging stuff – not that being challenging is a sure-fire way to rewarding pop music – that could’ve been improved by simply being sat on for longer. This may not be the case, but so many melodies here sound as if they were tried once, seen to fit and then finalised which, despite what the immediacy of pop music has taught us, is not always the best method.

Tennis may have sailed a great distance to bring about the inspiration for Cape Dory, but a similarly epic voyage of composition would have yielded far better results here. As it stands, it’s remarkably unremarkable. 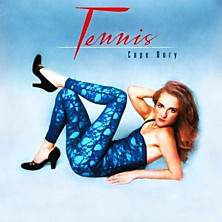