A new strand to his unique, ineffable vision.

David Lynch: cult film director, painter, transcendental meditation guru, aficionado of damn fine coffee… and now, a little confusingly, recording artiste. Sure, Lynch has always shown a willingness to alter his modus operandi when the mood takes him – in 2002, he ended a 20-year love affair with celluloid, declaring his subsequent work would be recorded to digital. But his reinvention as an electronic music producer is the sort of news that encourages some trepidation. Put it this way: his films are opaque, enigmatic affairs that go spelunking in the darkest recesses of the Hollywood subconscious; his music taste, meanwhile, ranges from Rammstein to Moby to early-60s dance craze The Loco-Motion, and those are three ingredients that don’t go together at all.

Yet somehow, Crazy Clown Time is an album that not just hangs together, but transfers something of Lynch’s uncanny cinema to the musical medium. There are things here that one might describe as Lynchian hallmarks: reverb-soaked guitar twangs, electronic washes that recall the creepy-soothing scores of Angelo Badalamenti. What is really intriguing, though, is the way he manages to transfer something of the characterisation present in his films into song. Pinky’s Dream casts Karen O in the role of the diva illuminated by a single sputtering light bulb, telling the tale of some doomed heroine and occasionally letting off bouts of Alan Vega-esque vocal Tourette’s. Good Day Today, with its crisp electro beats, think-positive message and gloomy synth undertow is the sort of thing Twin Peaks’ Detective Dale Cooper might listen to on his Walkman. And Lynch himself steps up to play the role of the gas-huffing Frank Booth psychopath: see the chilling title-track, a rambling monologue set to sluggish drums, orgasmic moans and slivers of backwards guitar. "He ripped her shirt off completely… then he pours a beer… he pours a beer all over Sally…" trills Lynch, his voice twisted in some strange mania.

Crazy Clown Time is not without its duff tracks – the album’s centrepiece, the seven-minute Strange and Unproductive Thinking, is transcendental meditation screed read out through a vocoder; undoubtedly a valuable experience for Lynch but gobbledegook to the rest of us. Still, this is an intriguing diversion for the veteran filmmaker – not quite good enough to make us want him to give up cinema for keeps, but certainly a new strand to his unique, ineffable vision. 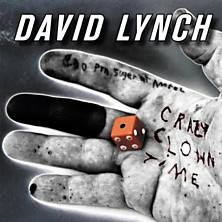