This band were never better than as a punchy reggae-lite trio and this was about as...

By 1983 Sting, Andy Summers and Stewart Copeland were trapped in a loveless marriage. Sure, the guys still cared about each other, but 4 years of teenage adulation and non-stop touring had highlighted the difficulties of having three such large egos within one tight-knit trio. Previous album, Ghosts In The Machine had ended up with a bland red on black cover because the members couldn't even agree on a design, such was the festering rancour. So it was that Synchronicity was to be their Abbey Road. A final masterpiece born out of tears and break-ups.

Following a lengthy gestation, the album came with all the hype and trappings due to such an event in the early 80s. With 36 different sleeves featuring pictures taken by the band themselves (well, it saved on those disagreements), attendant Godley and Creme directed videos and state of the art sonics co-produced by Hugh Padgham, it's a wonder that Synchronicity didn't sink bebeath the weight of its own publicity. But quality wins every time, and luckily Sting and co were still capable of delivering the goods.

Alongside the so-classic-you-don't-even-hear-it-anymore track; creepy, stalker-related "Every Breath You Take", Synchronicity does the usual Police trick of balancing pretention with pop. While its predecessor had name-checked Arthur Koestler, this one referenced the same AND Carl Jung. "Walking In Your Footsteps" made some kind of analogy between mankind's folly and the extinction of the dinosaurs (but hold on...dinosaurs didn't produce pollution and war did they? Oh well.); "Synchronicity II" took its inspiration from Yeats' The Second Coming; "Tea In The Sahara" was based on Paul Bowles' novel, The Sheltering Sky. never let it be said that Sting's work wasn't educuational. A whole generation read Lolita due to him as well.

Drummer Copeland's contribution, "Miss Gradenko" displayed his family's legacy of political globalism matched with Russian stereotypes while Andy Summers' "Mother", which seemed mere silly filler at the time, now sounds wildly funny and honest all at once. It certainly keeps the listener awake.

Of course Sting's major works here revolve around his own private life taking a downturn. "Every Breath You Take" and "Wrapped Around Your Finger" paint a desperate portrait of a marriage in shreds, while "Murder By Numbers" is taken from the point of view of a serial killer.

If the album suffers at all, it's from over-production. This band were never better than as a punchy reggae-lite trio and this was about as far as they could ever come without sounding pompous. It still has at its heart, however, a nugget of purest pop, and that makes it timeless enough. 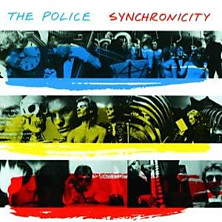