A fascinating study of one band's evolution over its first five albums.

To anyone bemoaning Simple Minds' second life as U2's little stadium-rock brothers, the aficionado would point to their early albums when they were experimentalists, their heads unturned by the US dollar. Now as recent releases like The Horrors' Skying are compared favourably with formative Minds efforts, there's a chance for everyone to appreciate the fuss. X5 is a box set of their first five albums, plus remixes and live tracks, nominally issued to commemorate the 30th anniversary of New Gold Dream (81-82-83-84) but, more pertinently, to tie in with a set of gigs that will draw exclusively on the material.

And it's a fascinating study of one band's evolution, as they quickly find their feet, take them in unexpected directions then plant them firmly in the 80s rock soil. Immediately, there's no real indication of the Glaswegians' past as punks Johnny and the Self Abusers. Life in a Day – Simple Minds' 1979 debut – owes an undeniable debt to Roxy Music and the David Bowie of Station to Station and Low, mixing curt piano lines and glam rock but also hinting at a sense of fun that would later be wiped clear. Chelsea Girl even sounds like the hit that would nevertheless elude them for three years.

Real to Real Cacophony, released just a few months later, is more stripped back but seethes with ideas from the jumbled snare flashes of Citizen (Dance of Youth) to the oompah synths of Film Theme. Empires and Dance in 1980 – is there anyone so prolific these days? Rihanna, maybe – is more out-there still, its adventure epitomised by the convulsive Twist/Run/Repulsion, with Jim Kerr still finding his voice but guitarist Charlie Burchill carving perfect geometric shapes. There are shared patterns with chronological peers Talking Heads but Simple Minds are already looking closer to home, to Sheffield perhaps (or further up the tree, to Düsseldorf), embracing electronics.

Moving along, jewels abound on 1981's Sons and Fascination in the scratchy Sweat In Bullet and a title-track where Kerr begins to nail his baritone, but bolt-on album Sister Feelings Call really shines. The headlong drive and waterfall synths of Theme for Great Cities would become a bed for late-80s techno monsters, and the Minds at last discover a killer chorus on The American.

Finally – one breathless year later – there's New Gold Dream (81-82-83-84), the stepping stone. Burchill's guitar is seeking out riffs now, Kerr is the rabble-rousing frontman – and there are hits. The glorious hooks of Glittering Prize still sound great and Promised You a Miracle is an unavoidable breakthrough; but that questing, quirky spirit is gone, replaced by a big bold music that will fatten the wallet. For the rest of us it was worth it for the journey. 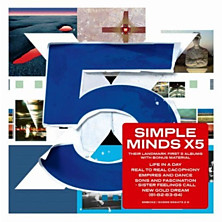