Marks Neame’s ascent to a stratospheric level as composer, arranger and bandleader.

The omnipresent pianist Ivo Neame has performed in Phronesis and The Cinematic Orchestra, and those are just two of his most high-profile outfits. This third album is completely dedicated to his own ambitious compositions, and features a semi-supergroup line-up gathered from the younger end of the UK jazz scene.

The inclusion of Jim Hart on vibraphone does much to impart a highly distinctive character to the music. Working alongside the clarinets, it creates a strong sense of third stream jazz/classical crossover.

The ensemble hurtles straight off into the densely-arranged title track (meaning “journey” in Hindu), and while Freestone solos, Neame constantly injects frills, stabs and flourishes. The old ideas of solo/theme are smeared together throughout these pieces, as the players maintain an active setting for each foreground line to interweave through and around.

When someone steps forward, their companions are always responding in the sidelines. Most of the tunes share a predilection for jittery motion, all players constantly hyperactive, but never without a keen purpose. The work of George Russell springs to mind as a precedent.

Neame plays accordion on American Jesus, adding to the chamber atmosphere. Emerging from a passage of sensitive tension, a Freestone flute solo plays against the tune’s springy rhythm. The frequently punning titles strike just the right note, as with That Syncing Feeling (a coasting swisher) and Owl of Me (with its japing, carnivalesque tone).

The best example of simultaneity is Unseen Coracle, where it sounds like the entire octet is building a solo as a single entity. Then, Moody moves towards some very whispery, detailed spaces, before becoming crowded to conclude.

Yatra burns with an extremely organised energy, and seethes with cerebral passion. It marks Neame’s ascent to a stratospheric level as composer, arranger and bandleader. 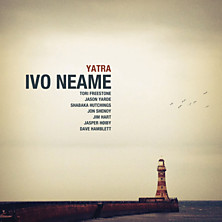