Bob Dylan as an artist had a tough early 70s. By 1974 our Bob was in the strange position of being still regarded as the next Messiah while seeming bored with himself. This was, remember, the era of Planet Waves and Self Portrait – not his brightest moments - while his tour the previous year with the Band was also fairly iconoclastic. In the end two factors got Dylan back on (hem hem) track: painting and a very messy breakdown of his marriage.

In fact, one seemed to lead to the other. Dylan had spent two months in the spring of 1974, studying painting under Norman Raeben in New York. Afterwards he claimed: ‘It changed me. I went home after that and my wife never did understand me ever since that day’. While the album has a confessional sense of hurt Dylan’s always denied the connection but still admits that there’s a lot of pain on the album.

Initially sessions were held in familiar surroundings in New York. What’s more he was back with his old record company following an unsatisfactory sojourn with David Geffen’s Asylum label. Bob used Eric Weissberg’s band, Deliverance, to rush through the recording process and have the album finished in one week. In typical Bob form he showed scant regard for polish, leaving the sounds of his buttons and nails rattling against the guitar strings on many tracks. All was set for an Autumn release until, back in Minnesota, he played an acetate to his brother who suggested that it did need a more commercial sheen. Hastily assembling a cast of local musicians, Dylan re-recorded about half of the album and from these two halves this masterpiece was born.

From the opening track, “Tangled Up In Blue”, Dylan embarked on a whole new era in his work. Seemingly autobiographical, these tales of a lover relating a series of unrelated events all set in a mythical America used the impressionist method that he’d learned from Raeben: ‘I wanted to defy time, so that the story took place in the present and the past at the same time. When you look at a painting, you can see any part of it, or see all of it together. I wanted that song to be like a painting.‘ The same trick is pulled on the gorgeous “Simple Twist Of Fate.”

Over ten songs Dylan alludes to heartache, deception, angry name-calling and poignant regret and loneliness. While on the searing “Idiot Wind” he seems to have no mercy for his ex (‘It’s a wonder you can even feed yourself’ on “You’re A Big Girl Now” he pleads with her : ’I can change I SWEAR’. It’s different from his previous work because suddenly he’s singing about things that don’t pertain to youth anymore. Gone is the clever, sneering tone of the mid-60s or the haranguing of his protest years. It’s a world-weary, nostalgic and ultimately more poetic Dylan we hear, and that is what makes Blood… a timeless record. 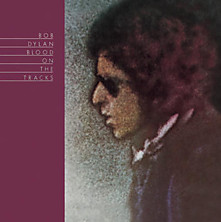