Though born out of a fraught gestation period, this second LP is a thing of beauty.

"It was at times difficult to make this record," writes Fleet Foxes’ lead singer Robin Pecknold in the self-penned press release for Helplessness Blues, citing illness, creative doubt and reassessment as factors the Seattle sextet grappled with in following up their massively popular, critically adored debut album. Not that you’d know it from a cursory listen: Helplessness Blues sounds every bit as assured as their earlier work, but given time to unfurl in your consciousness it displays facets of the band hitherto unseen. Peppered with ghostly harmonies and references to aging – even breaking out into free jazz at one point – it is a bigger, braver set than that which precedes it, suffused with both melancholy and sunshine.

Setting aside the adulation that greeted the band’s arrival (something Pecknold himself seems faintly baffled by), you’d be hard-pushed to label what Fleet Foxes are doing as anything particularly groundbreaking. Rather, the band place themselves firmly in the lineage of folk/rock greats from Crosby, Stills, Nash & Young to Brian Wilson and Pete Seeger, suffering none for it. In Someone You’d Admire it’s impossible to ignore the knowing winks to their antecedents, but the panache and confidence with which the band shapes their harmonies and maximise their melodic touch is second to none.

Astral Weeks is singled out as a major touchstone by Pecknold. While his honey-sweet tones are a million miles away from Van Morrison’s ragged howl, this record certainly shares something of the adventurousness that marked that LP. Over the sprawling, segmented eight minutes of The Shrine / An Argument, the band traverse from haunting trad-folk to a deep, mellifluous groove before finally bowing out in a flurry of brass, woodwind and strings. The song boasts Pecknold’s most affecting delivery to date, until the subsequent Blue Spotted Tail makes a case for being the loveliest in their catalogue; a plaintive finger-picked ballad contemplating relationships and mortality against a cosmic backdrop.

Helplessness Blues is born out of a fraught gestation period, touched by doubt, uncertainty and the travails of growing older and finding your place. But it is also a thing of beauty, and as the blissful outro of its title-track or the breathless, exuberant surge of closer Grown Ocean demonstrate, at its core lies a tangible sense of wonder and hope. 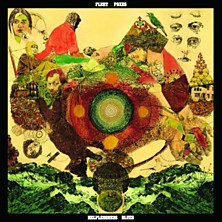