Soundway Records, the Brighton-based label dedicated to the mining of global grooves, might well only consider itself a conduit for the music it releases, and insist that the tunes are where the light ought to be shone. Realistically, though, were it not for them and their equally dedicated pals, you wouldn’t be reading a review of this music on this website. Cartagena! is a 19-track compilation, informatively subtitled ‘Curro Fuentes and the Big Band Cumbia and Descarga Sound of Colombia 1962-72’. While cumbia, a style of band-led dance music built on woodwind and percussion, was ubiquitous in most of South and Central America from the 50s onwards, little of it travelled to other shores – so almost everyone who hears these songs will be doing so for the first time.

And Curro Fuentes? He was (he passed away last year) a gentleman from Cartagena, a northern Colombian city, who was part of the family that founded the Discos Fuentes label – but elected to go it alone with his own imprint, Discos Curro. Considerable success was his reward for such single-mindedness, and his keen ear for what made a dancefloor tick. None of which is to suggest that Fuentes, who assembled a Motown/Stax-esque in-house band at his label, achieved this by smoothing out or dumbing down, as most of these sublimely swinging cuts demonstrate.

With long instrumental sections often prevailing, and lyrics consisting mainly of exhortations and refrains, the musicianship of the various players collected here comes to the fore. It’s stirring stuff, deliberately kept raw by Fuentes to bring cumbia’s live sound into the studio. You might hear a barroom blast of hot jazz piano (La Cumbia del Pascador by Puerto Rico y Su Combo); a, for the time, breakneck-paced rout of brass and keys (Homero y Su Combo con Pacho Galan y La Sonora Curro – get all that? – with their Oye Negra); or flights of percussive fancy which avoid outright indulgence, chiefly from Clodomiro Montes y El Super Combo Curro. You will almost certainly feel compelled to shake a leg, and – as hackneyed a cliché as this is – feel like summer has arrived. 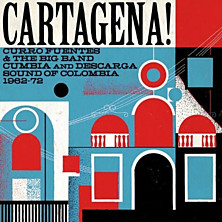