On this third LP, Torche have found the great songs to match their extraordinary sound.

How many rock acts can you genuinely say started to sound better once they cleaned up their act and got a little slicker? If you’ve even bothered with this exercise then you’re probably staring furrow-browed at six, maybe seven grubby fingers, but with Harmonicraft you can now add Florida’s Torche to that paltry bunch of misfits.

Long able to lay claim to the title of Heaviest Pop Band In The World, Torche have now found a replacement for errant guitarist Juan Montoya and taken newcomer Andrew Elstner onboard. Simultaneously, they’ve made the decision to rely less and less on simple heft and instead streamline their songwriting.

Those who’ve followed the band closely will have seen it all gradually unfurling as though they’ve been gawping at some weird wall chart highlighting evolutionary development. They’ll have been present as the band sloughed off their early sludgegaze plod, which, if enjoyably different, was a tad lacking in terms of bombast and longevity.

Then they’ll have witnessed the edge-smoothing of 2008’s Meanderthal and subsequent transmogrification into the burgeoning hooks of 2010’s ridiculously brief, blink-and-you’ll-miss-it Songs for Singles. Those ‘growers’ have since bloomed into one-hit-and-you’re-hooked barnburners, meaning the band’s sonics are now fully deserving of their riot-in-a-jellybean-factory album sleeves.

Don’t be fooled into thinking the heavy’s not there any more, mind, since the Melvins-esque thwump, frustrated Helmet-ish traipse and velvet-gloved punch of oft-forgot post-hardcore supergroup Handsome are still intact. But now they’re swaddled in glorious shimmers (Kicking), ecstatically joyous guitar work (Walk it Off) and strange bouts of QOTSA-gone-Jesu abandon that are lush, plush and large enough to warrant their own postcode (Looking On).

Whether the metamorphosis is yet complete is anyone’s guess, but this latest stage is a true game-changer. Torche have always been a good band and sometimes even a great one, but with Harmonicraft they’ve found the songs to match their extraordinary sound. This, then, means the only thing we’ve got left to worry about right now is the immense and inevitable sugar-crash in store once we stop spinning the album. This mightn’t be the most nicest of prospects, but at least the short-term remedy is blissfully simple: grin guiltily to yourself and prepare for just one more delicious earful. 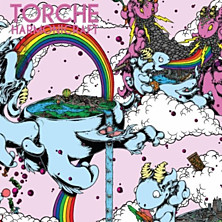