...a battle royal between full drum kit and tabla which still takes my breath away...

This is a curious album. For one short studio session back in the '60s, the king of jazz drummers Buddy Rich, and Alla Rakha, the master of the Indian tabla, came together in an early attempt at East-West fusion. The resulting album was hailed as a 'landmark' and a 'seminal recording' but nevertheless had sunk without trace by the 1980's. Now re-released in re-mastered and restored form, does it stand the test of time?

As a student in the 1980s, I was given an ancient copy of this disc and wondered at the virtuosity of Alla Rakha. I also wondered what Buddy Rich was doing as he only obviously features on two of the five tracks. With this new CD version I realised that he also appears on a third track, minus his shoes and sitting cross-legged playing the dholak (a small hand drum). It's not that the sound quality of the new release allows such insights, although it is pretty good being re-mastered from the original session tapes, but that the copious sleeve notes explain what's going on in great detail.

The first two minutes of the disc transport you to the Taj Mahal, with sitar and flute introducing a simple theme reminiscent of Indian restaurants everywhere. In common with the other tracks the melody then stops abruptly to allow the stars to shine. The following schizophrenic duet sees Rich imitating the tones of the tabla on a snare drum whilst maintaining a different time signature from Rakha. The third track is fantastic, a battle royal between full drum kit and tabla which still takes my breath away. The last two tracks are tabla solos with Rakha at the top of his form.

If you want a nice disc of typical Indian music, this one's not for you. But this re-release, following the deaths of Buddy Rich in 1987 and Alla Rakha last year, offers a unique insight into the early days of fusion. Worth a listen. 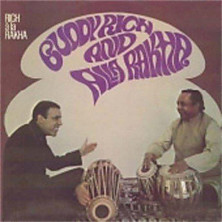