The Avisons achieve what every composer hopes for, to move the listener's spirit.

“Northern English 18th century concerti and sonatas” sounds like one of the more esoteric specialist subjects on Mastermind. It's actually what the Newcastle-based period band, The Avison Ensemble, has recorded for all nine of their previous discs. This first recording of theirs for Linn Records shows that they're more than capable of making their mark outside the sphere of interesting niche repertoire.

Handel always wrote with an eye to popularity and bank balance, and his Concerti Grossi Opus 6, or “Grand Concertos”, were no exception to the rule. Written in 1739, they tapped into the British public's enduring enthusiasm for Arcangelo Corelli's set of 12 concerti grossi. Handel emulated Corelli's scoring, writing for strings, optional oboes, and continuo, with a soloist group of two violins and a cello. He even gave his set the same opus number. However, the emulation stopped there, as the music itself is typical Handel, with its mix of variety, innovation and self-plagiarism. Fugues and dances sit side by side, there's a multitude of different instrumental colours and textures, and he frequently borrows melodies from his other works. In fact, No.9 is almost a straight transcription of his earlier organ concerto, “The Cuckoo and the Nightingale”.

The Avison Ensemble's interpretation, performed without the optional oboes, is satisfyingly different. It's taken at a statelier pace than some (you'd have a hard job actually gigging to No.9's Gigue), and it's perhaps not as cleanly executed as other recordings. However, in place of the clipped, gossamer-weighted speed of many period performances, you get bags of smoothly delivered warmth and brightness. Added to that, whilst it sounds like a contradiction to then talk about its raw quality (smoothly delivered rawness, come again?), that's exactly what it has, thanks to a nicely controlled but very present element of gung-ho enjoyment. Then, in the way the musical lines swell and subside, and dynamic contrasts are played upon, the Avisons achieve what every composer hopes for their music, namely the ability to move the listener's spirit. Bravo. 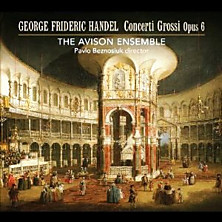