An amazing, inventive and wholly unique eighth album from an artist without peer.

Ever the inventive artist, for her eighth studio long-player Björk also turned inventor, commissioning the construction of specialist instruments to compose these 10 tracks upon. Among them, the gameleste – a fusion of gamelan and celeste – which can be heard, a persistent twinkle in the mix, across this set’s lead single, Crystalline. The Icelander also turned to rather more modern hardware for this album – certain tracks are partly recorded on an iPad, and the intention is for each of these tracks to emerge as an app, as well as via traditional album formats.

Impressively 21st century stuff, for sure. But while her commitment to composition away from typical means – she doesn’t play piano or guitar, so seeking new options is both a necessity and a novelty – is commendable, experimentation is nothing without accessibility, especially for a musician with an audience as sizeable as Björk’s. Thankfully, Biophilia serves as wonderfully as a ‘standard’ album as anything else – a plus, given that interest in her app series is, one imagines, slightly on the wane (it certainly is in this writer’s household). Conceptual in the sense that each song is associated with a readily presented theme – typically of either an earthbound or extraterrestrial nature, from lunar cycles (opener Moon) to tectonic plates beneath our feet (Mutual Core) – it doesn’t overload the listener with powerful ideology. If desired, one can detach from the lyrical message and dive into a most rewardingly singular din – again, Björk has crafted sounds which are entirely hers alone.

Over the years her voice has mellowed – now, rather than fly off the scale to the occasional detriment of the music around it, it’s a controlled presence, complementing perfectly the whirrs and clicks, static and choral highs which surround it. And the music flits from the sublime to the strikingly brutal – the aforementioned Mutual Core slips from blissful ambience into bombastic electronic percussion, leaving the senses reeling, only to fade back into a comforting lilt; and Crystalline’s jungle-flavoured breakdown come its climax (part-Aphex Twin, part-Reprazent) is one of the best jaw-on-the-floor moments in 2011 pop so far. Closer Solstice is a mellow affair which recalls the sounds of a non-Björk app, namely the relax-into-this puzzler Quell and its Steve Cravis soundtrack. Elsewhere, there are echoes of albums past: Hollow is a dark, menacing relation of the delicate fare that dominated 2001’s Vespertine; Cosmogony commands brass into action, bubbling beneath heavenly choral backing vocals; and Thunderbolt initially stirs unlikely thoughts of The Anchor Song, from 1993’s Debut, before progressing into something multi-layered and magical.

Focusing on the genesis of Biophilia is an unfortunate inevitability given how much attention has been placed on both its writing process and its newfangled method of distribution. But this is far from a folly, an endeavour designed to flog touch-screen tablets to the singer’s fanbase. It’s a mesmerising album which confirms that Björk can weave dumfounding wonders from Silly String – whatever’s placed before her, she can turn to her advantage, taking her audience on a trip the likes of which no other contemporary artist is capable of planning, let alone embarking on. In a word: amazing. Again. 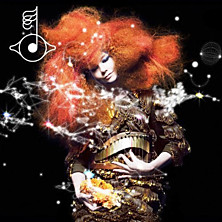