The most exciting and consistently well-sung Don Giovanni to appear for several years.

Recorded at concert performances at the 2011 Baden-Baden Festival, this new Don Giovanni stands out from the crowd (there are countless vintage classic versions in the catalogue) with a starry principal cast and compelling excitement from conductor Yannick Nezet-Seguin.

Unusually, the set boasts top-class voices in both of the aristocratic leading female roles.

Diana Damrau is powerful, sensitive and refreshingly clear-voiced as Donna Anna. Mezzo Joyce DiDonato is a fruitier-sounding Elvira than many, but few will quibble at such glorious vocal fluency. Mojca Erdmann's Zerlina is beautifully sung, but under-characterised compared to the other vivid portrayals.

Ildebrando D'Arcangelo is a commanding presence in the title role, his mature, velvety tone suitably aristocratic with flashes of suavity and menace. It is a big, lyrical voice that, though never unfocused, can lack the subtlety of the best Giovannis.

Luca Pisaroni is an excellent foil as Leporello and, unlike in many recordings, his voice distinctive enough to ensure there is no mistaking him for Giovanni.

Rolando Villazón is far more hot-blooded and impassioned than most Don Ottavios, but his wonderfully nuanced accounts of "Dalla sua pace" and "Il mio tessoro" – a brilliant, bravura performance – should dispel any doubt about lack of Mozartean sensitivity. It is terrific singing by any standards, and Villazón proves he is stylistically at home in this repertoire – a splendid asset to this set.

Nezet-Seguin demonstrates a strong sense of pacing, maintaining tension and momentum. Following in the footsteps of Charles Mackerras, he combines the well-defined articulation of an historically informed approach with the full-bodied sound of a modern orchestra – in this case the vibrant Mahler Chamber Orchestra.

Apart from acquired-taste twiddly fortepiano improvisations throughout the orchestral numbers (historically authentic but unnecessary today, and grating on repeated listens), the set's biggest drawback is an absence of the stage noises or sound effects needed to bring the opera alive on an audio recording.

But the performance itself oozes plenty of theatrical flair. The most exciting and consistently well-sung Don Giovanni to appear for several years, this set is strongly recommended. 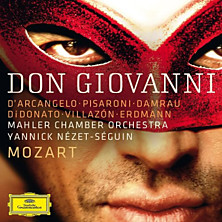