Robert Wyatt The End of an Ear Review

In August 1970, Robert Wyatt was still a member of Soft Machine, but he’d soon leave that tempestuous combo of strong personalities and pointed musical differences. The End of an Ear, recorded during time away from the band and now remastered with new liner notes, marks both an impending end and also the beginning of Wyatt as an artist coming into his own.

This was his first solo album, a series of dedications to colleagues and loved ones, with Wyatt showing off his multi-instrumentalist chops and (wordless) vocal prowess. However, he had yet to develop the characteristics instantly familiar to solo Wyatt fans from 1974’s Rock Bottom onwards: those sidelong takes on pop music; those plaintive, droning keyboards; his emotionally and politically quizzical lyrical style.

Although To Carla, Marsha and Caroline (For Making Everything Beautifuller) hints at a future, mournfully romantic air, generally Wyatt is still very much in the milieu of free jazz, calling on Soft Machine’s Elton Dean for “alto saxello” and Caravan's David Sinclair for organ contributions. That's especially evident on the garrulous, excitable, intricate exchanges of the nine-minute To Nick Everyone.

However, this is no initially unpromising "new direction" to be endured, rather than enjoyed. Shorter pieces like To Mark Everywhere and To Saintly Bridget, for all their ambition, exhibit a certain breezy, British quality common to domestic jazz of the era. Despite the prominence of rock, this was still the default incidental music and soundtrack to documentaries, hence the cheerily ramshackle redolence of much of The End of an Ear. Much feels deceptively unpretentious – it's only at the end that you realise you've been free-jazzed to the furthermost shores of the genre.

Dominant is his two-parted cover of Gil Evans' Las Vegas Tango which tops and tails the album. Here Wyatt, utilising tape effects and multiple tracks over a shuffling backbeat, chatters and emotes non-verbally, in the tradition of the Dadaist Kurt Schwitters, Joyce and the great avant-garde jazz vocal tradition stretching back to Louis Armstrong.

Most inadvertently poignant, title-wise, is To the Old World (Thank You for the Use of Your Body, Goodbye), given that this was released a three years before the accident which would leave Wyatt wheelchair-bound. After that he considered himself to be a different artist, a different man than before. 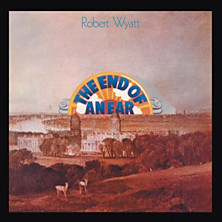