Felix Mendelssohn was, famously, one of the most extraordinarily precocious composing talents the world has ever seen. Presented in this new Hyperion release, alongside his well-loved mature Violin Concerto in E minor, is the earlier D minor concerto, written when he was just 13.

The soloist is young Russian star Alina Ibragimova, 2007 graduate of BBC Radio 3's New Generation Artists scheme, partnered by the Orchestra of the Age of Enlightenment (on period-instruments) under Vladimir Jurowski.

Ibragimova adopts a historically-informed style on her 1775 Anselmo Bellosio violin, the sound lighter than we are used to hearing in Mendelssohn's mid-19th century E minor masterpiece. But her svelte, unforced tone is just right in this context – and, with sparing use of vibrato, she conjures some beguilingly sweet tones. In the brooding opening movement she is marvellously fleet-footed, never underpowered.

Clear orchestral textures and crisp articulation heighten the intensity of the romantic sweep. The first movement brims with fervent passion – Jurowski driving forward excitingly, but also allowing space for reflection. Refreshingly, Ibragimova takes the sumptuous Andante at a genuine, gently flowing, “walking pace”, her violin singing eloquently and tenderly, followed by a daringly fast finale that she’s never in any danger of not pulling off.

Her absolute unanimity with the woodwind, which joins her in the scampering main theme, is breathtaking, and her occasional discrete use of portamento feels completely apt. This is a delightful, compelling performance from beginning to end, the equal of any in the catalogue.

The early D minor concerto, scored for string orchestra, is less distinctively Mendelssohnian, displaying, unsurprisingly, the juvenile composer's classical heritage. But it is also forward-looking – there are shades of Weber in the cloak-and-dagger stalking motif that opens the first movement.

An attractive work in its own right, Ibragimova approaches the concerto with no less commitment than the E minor, and the result is a rewarding experience. With rhythmically taught OAE strings, the folk-like dancing finale is an exhilarating ride.

Sandwiched between the two concertos is an atmospheric account of the famous Hebrides overture, Jurowski tangibly evoking romantic Highland mists and an adventurous spirit with pungent woodwind, churning cellos and majestic brass. 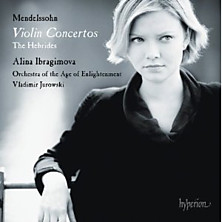