A deeply affecting experience that ought to win the opera many new admirers.

2013 sees the 100th anniversary of the birth of Benjamin Britten. Doubtless many new recordings will emerge as part of the celebrations – and the bar is set very high with this Virgin Classics release of one of his less-familiar operas.

There are a number of reasons why The Rape of Lucretia, premiered in 1946, is relatively unloved – its grim subject matter, concerning the rape of a Roman general’s wife by their ruler Prince, and her subsequent suicide, probably being the foremost.

Another is its modest scale, employing a chamber ensemble rather than a lavish symphony orchestra. And, although the opera directly follows the widely appealing Peter Grimes in the canon of Britten’s operas, the musical style of Lucretia is more demanding, foreshadowing the oblique angularity of his late works.

But none of these potential difficulties are given a chance in this dramatically gripping account, recorded at concert performance at the Snape Maltings in Aldeburgh in 2011.

Oliver Knussen conducts a crack ensemble of instrumentalists, who have as vital a role as the cast. They fulfil it with vitality and total commitment – from gently caressing harp solos to passages of full-blooded orchestral power.

The singers, too, are first rate. Ian Bostridge and Susan Gritton play the storytelling Chorus with impassioned incisiveness, conveying the potentially dry prose with vivid theatricality and, at times, welcome wryness.

There are strong performances too from Christopher Purves as Lucretia's husband Collatinus and Peter Coleman-Wright's lust-obsessed Prince Tarquinius; the smaller roles also impress.

Although the story's brutality inevitably means that any performance of Lucretia is uncomfortable, Knussen and company ensure that Britten's score shines in a radiantly positive light, offsetting the skin-crawling nastiness with musical beauty – finely captured with excellent balance in the warm, clear Maltings acoustic.

The composer's own 1970 Decca recording has a unique authenticity and, in Janet Baker, a peerlessly expressive Lucretia. But this latest version complements it brilliantly, offering a thoroughly engrossing and deeply affecting experience that ought to win the opera many new admirers. 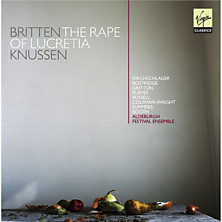