The drum and bass producer turns his midas touch on hip hop. The sheer audacity of...

It would appear that there is no one genre big enough to contain the artistic prowess of Adam F. Not content with setting a new standard in drum and bass with his 1998 album Colours, the all conquering producer has turned all the knobs and flipped all the switches in his studio so that they point to hip hop.

Anyone present at Adam's DJ appearances will have heard him regularly dropping rap in to his drum and bass sets as well as using effects and jingles to personalise his turntable delivery. Cultivating an interest in film scores such as The Mission and Batman beyond the confines of the DJ box has also affected his approach to music making. It is the fusion of these two schools of thinking that are responsible for this masterful release and left many of hip hop's upper echelons reeling only to declare Adam F as the new Dr Dre.

Kaos owes much to A&R guru Kim Spikes for its all star cast. Having worked on the last Busta Rhymes album she was in a strong position to present Adam's ideas directly to the artists without having to negotiate the usual record company grind. Having recorded the introduction and backing track for what was to become "Smash Somethin'" using a full orchestra and choir, Redman was easily won over once he realised the voices, which easily dwarf the Hallelujah chorus, were singing his name!

Without reservation the opening revels in its' histrionics and won't fail to raise a smile at the absolute shamelessness of it all. Following that, LL Cool J, De La Soul, Guru, M.O.P. and CNN were won over in gradual succession, and so Kaos took shape. The sheer audacity of this album, its unabashed confidence and sense of drama is jaw dropping. It's like Tim Burton meets Dr Dre for a block party in the post-apocalypse year 3000.

Adam F has delivered such a fresh and hyped take on the hip hop sound that it would be fair to say that this album reaches miles above the years' rap releases. The slick R&B female vocals of Lil Mo on "Where's My...", the dirty acid jam of LL Cool J's "Greatest Of All Time" as well as Beenie Man's dancehall flow on "Dirty Harry's Revenge" illustrate both Mr F's versatility and intuition.

So, how large is this album? Imagine Westwood sporting a ten gallon Stetson, a top an Indian elephant at the summit of Everest booming "Nothin' but big things, baby!!!" and you're almost there. 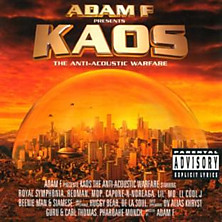