An icy, near-derelict soundscape of skeletal indie-rock and Krautrock.

Lower Dens’ first album, 2010’s Twin-Hand Movement, was such a spectral introduction to the band that it bothered fewer ears over here than a warm breeze in July. But the Baltimore band’s minimal, wraith-like mix of wintry indie-rock, dream-away sounds, gently propulsive rhythms and wispy, androgynous vocals compelled anyone who did feel its subtle charms to do two things: listen repeatedly and obsessively.

At the helm is Jana Hunter, who stalked acid-folk territory alone before ghosting into less mossy terrain, and her distant murmuring and spooked atmospherics, while hypnotic, are too ghostly and odd to reveal much beyond the cosmic heart at Lower Dens’ centre. It was Twin-Hand Movement’s indecipherable mystery and the flickering phosphorescent glow emanating from deep that made it so alluring. This follow-up is no different.

That Hunter writes with grand themes in mind that you’ll just have to take her word for. The debut was, we’re told, about community and belonging. Nootropics, meanwhile, is named after a mind-enhancing drug – like the one Bradley Cooper takes in Limitless – and explores the terrible bargains humanity is making for an easier life.

How Hunter reconciles this with licensing a song to Exxon isn’t clear lyrically. Her voice is too far away in the mix – a mood-maker rather than a point-maker. Maybe, though, it encouraged the self-flagellation that bruises much of Nootropics. Lower Dens have a sound that places them in the same dreamy but bleak hinterland inhabited by ghoul-chasers Deerhunter and Timber Timbre – only Hunter swaps Badalamenti’s twang and dreadheart blues for an icy, near-derelict soundscape of skeletal indie-rock and, this time out, the Autobahn chug of Krautrock.

The hallucinatory effect prevails. The instrumental Lion in Winter, Pt. 1 is a disquieting passage of frosty drones; the groovesome Lion in Winter Pt. 2 is a lo-fi Kraftwerk wreathed in star-bright guitars and minor keys; In the End is the Beginning isn’t so much a curtain-closer as a grimly foreboding fade-out. Adding electronics to an already complex equation might suggest angular songs but these are sleek soothing balms sombrely and meticulously crafted to usher the listener in.

And this come-hither intimacy perhaps tells us that the band’s painful line-up changes inspired the record more than grand ideas of transhumanism. The everyday is just fine when it sounds this strange. 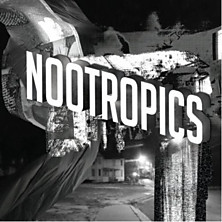