...Sounds very much of the now, something that a Macca album hasn't done in a while.

Started before and completed after the downbeat-yet-still-satisfying Chaos And Creation In The Backyard, Memory Almost Full is a perfect capture of Paul McCartney, the pop star. With a huge sweep of his musical past at his fingertips and fully aware that he is the most newsworthy he's been for years, McCartney returns with the first album in his career for a company other than EMI.

The fact that we're talking Hear Music, the label of Starbucks, as his main partner almost takes music full circle right back to the coffee bars that were all so much the rage in Macca's youth. But this is no skiffle record; but there's certainly a whiff of straightforward, direct pop with the unabashed wistfulness of its predecessor left to one side. This is his first album that marries the globe-trotting crowd-pleasing McCartney of late with his huge, adoring live audience as opposed to the dark stuff of Driving Rain and Chaos. But then, let's be frank, it has been something of a tumultuous decade for the old boy.

What we have is clean, clear, upbeat McCartney, referencing virtually every part of his 45 years as a recording artist with some very strong song writing (although “Mr Bellamy” actually manages to sound like 10cc). “See Your Sunshine” has that lovely summer feel that evokes “Arrow Through Me” or “Heaven On A Sunday”; “Gratitude” could have been on the White Album. “That Was Me” fully acknowledges his Fab past. He strolls back to the medley of Abbey Road to close, climaxing with the moving “House Of Wax” before writing his own funeral song in “End Of The End”.

When you see Paul McCartney in concert, there is that moment when you see his old footage behind him and you are amazed that it's the same guy there in front of you. Memory Almost Full has the same effect – unashamedly nostalgic and not without its flaws, it still sounds very much of the now, something that a Macca album hasn't done in a while. 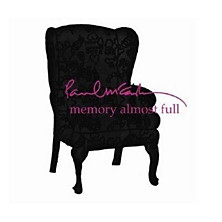